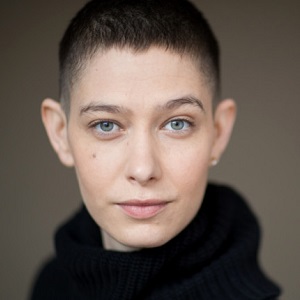 “Legal trouble does not mean you can't fulfill your teleological purpose.”

Asia Kate Dillon is attracted to both man and woman In an interview, he revealed that he is dating a man but further detail is not available about their relationship.

Who is Asia Kate Dillon?

Asia Kate Dallion is an American actor and he is famous for his role Brandy Epps in ‘Orange Is The New Black’ and Taylor Mason in ‘Billions’. Along with his acting career, he is the production director of MIRROR/FIRE productions.

He was born on November 15, 1984, in Ithaca, New York, USA. He is currently 34 years old. He was assigned female at birth but later, identified as non-binary. He identifies as pansexual which stated he is attracted to multiple genders. He has not provided information regarding his parents, siblings, and about his childhood. Dillon holds American citizenship but his ethnicity is unknown.

He attended the American Musical and Dramatic Academy and graduated from there. During his junior year of high school, He completed the Meisner training program at The Actor’s Workshop of Ithaca at the age of 16. He became the youngest student to admit in the class.

He portrayed the title role of Rachel Corrie in the play ‘My Name Is Rachel Corrie’ in 2007. Later, he took training from the Academy Award and Tony Award-winning playwrights.

The, he was featured as a Lucifer in ‘The Mysteries’ and played in ‘The Tempest’ at the Shakespeare Theatre Company in Washington, DC.

He portrayed the role of Brandy Epps in eight episodes of ‘Orange is the New Black’ in 2016 and he became one of the first non-binary actors cast in a major television show.

He played in season 2 of Showtime’s Wall Street drama ‘Billions’ in 2017.

In November 2018, he was announced to be a star in ‘The Outside Story’.

He is also the producing director and founder of MIRROR/FIRE Productions. He created ‘US’ which is a performance piece that explores races, and the Black Lives matter movement in the USA.

He was nominated for Critics Choice Award in the category Best Supporting Actor in a Drama Series ‘Billions’ in 2018 and 2019. He has also been nominated for Screen Actors Guild Awards in the category Outstanding Performance by an Ensemble in a Comedy Series ‘Orange Is the New Black’ in 2018.

He has earned a huge sum of money from his professional career but his exact net worth has not been revealed yet.

He submitted his name for an Emmy Award for acting and he was allowed to choose either actor or actress because it is a gender neutral world. He submitted as a supporting actor.