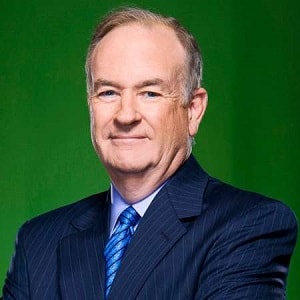 “Single parent situations drive poverty and often lead to unsupervised kids. Many boys growing up without fathers often feel angry and abandoned. Thus, they seek comfort in all the wrong places”.

Bill O’Reilly was married to Maureen McPhilmy in November 1996. They gave birth to a daughter Madeline and a son Spencer. They, however, could not hold the relationship and got separated in April 2010 and legally divorced in September 2011.

His current relationship status is single. Even if he is dating someone, there is no information about his love affair.

Who is Bill O’Reilly?

Bill O’Reilly is a popular TV show host, author, and radio personality. He is widely known in the U.S. media. He is currently involved in the most watched and popular cable news show for the past 13 years. His aggressive interviewing style and speaking critically natural with world leaders and figures have made him famous.

He was born on September 10, 1949, in New York City, New York, USA. His birth name is William James O’Reilly Jr. He holds American citizenship and he has a mixed ancestry of Irish and a small amount of English.

His father’s name is William James Sr. and his mother’s name is Winifred Angela(Drake) O’Reilly. His father was a wise investor and a frugal man while his mother was a physical therapist. He has a sister and her name is Janet. His family moved to Westbury, Levittown after two years of his birth.

He had a second-hand car in his family. They lived in a small home with a single bathroom. They used to go to Miami during their summer holidays.

He joined Marist College and completed his bachelor’s degree in history in 1971. He completed his master’s degree from Boston University in broadcast journalism in 1976.

He debuted his career as an anchor and a reporter at WNEP-TV in Scranton Pennsylvania. He worked there in the weather department and many other departments. Later, he shifted to Dallas to investigate report for WFAA-TV.

He worked in various networks which includes KATU in Portland, KMGH-TV in Denver, WFSB in Hartford, etc. He investigated the report and exposed the corrupt city marshals in 1980 where he used to work as an anchor at the ACBS-TV for the program ‘7:30 Magazine’.

He collaborated with ‘Inside Edition’ in 1989 and worked as an anchor. He interviewed with the murderer Joel Steinberg and so on. Later he quit the company and he completed his thesis on ‘Theory of Coerced Drug Rehabilitation’ from Harvard University.

After his degree, he joined ‘The O’Reilly Report’ which was later renamed ‘The O’Reilly Factor’ and it became the top-rated show of the three major U.S. He also worked as a host for a radio show ‘The Radio Factor’ which was broadcasted more than 400 radio stations. He worked there till 2009.

Besides hosting, he is also an author. His first book was ‘Those Who Trespass’ was published in 1998, and later he published ‘The No Spin Zone’, ‘Who’s Looking Out For You?’, ‘A Bold Fresh Piece of Humanity: A Memoir’, and ‘Pinheads and Patriots’. His book ‘Killing Lincoln’ became the top list in the New York Time list in 2011.

In 2008, he received the National Academy of Television Arts and Sciences Governors’ Award at an Emmy awards show. He also got an Emmy Award for his work of skyjacking.

Bill O’Reilly: Net Worth and Salary

It is estimated that he has a net worth of around $80 million. He has earned his total amount from his social media career. But details about his salary and other incomes are not disclosed.

Bill O’Reilly has a height of 6 ft. 3 inches and he weighs 98 kg. He has dark brown hair and black eyes. Other information about his body measurement is unavailable.

Maureen E. McPhilmy after divorcing Bill O’Reilly due to domestic violence and sexual harassment, has now married to Jeffrey Gross.