Blake McIver Ewing is an American singer-songwriter, actor, model, and pianist. He is in a relationship. 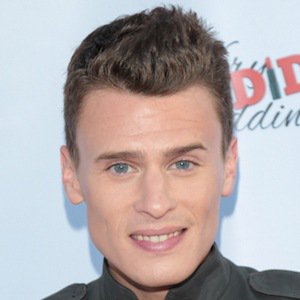 In the male homosexual community, we love to label and categorize and organize each other as if we are in a never-ending high school biology class.

When I was 14, I came very close to becoming a gay teen suicide 'statistic,' but I then turned to music, my piano, my loved ones, and discovered that it does in fact get better.

I'm not hiding who I am anymore - not pretending I'm something I'm not.

Blake McIver Ewing is gay and is currently in a relationship with producer and actor Emerson Collins. He posted pictures with the producer on February 15, 2019, with a  heart emoji.

Also, he said that they have known each other for 5 years. The pair seems to be in a deep relationship.

Who is Blake McIver Ewing?

Blake McIver Ewing is an American singer-songwriter, model, actor, and pianist who is best known for his role as Derek on the sitcom ‘Full House’.

He is also widely recognized for his role as Waldo in the 1994 feature film version of ‘The Little Rascals’.

He was born on March 27, 1985, in Los Angeles, California, USA. He is currently 35 years old and is also known as Blake McIver and Blake Ewing. His father’s name is Bill Ewing and his mother’s name is Susan McIver.

He has got a brother named Zack Ewing. His mother was a member of ‘The Golddiggers on Dean Martin Presents the Golddiggers’ from 1968 to 1973.

Blake holds American citizenship but his ethnicity is unknown.

He joined the Heritage Christian High School and graduated from there. After that, he attended the University of California, Loa Angeles, and graduated with a  Bachelor’s degree.

Blake McIver Ewing began his career at the age of six. He debuted his television career from the role of himself in the series ‘Star Search’ in 1992.

Blake McIver Ewing’s other notable film roles include as Taverner in ‘Tom and Huck’ in 1995, Church Choir in ‘Raising Helen’ in 2004, etc. Additionally, he gave the voice of Eugene Horowitz in the film ‘Hey Arnold! The Movie’ in 2002.

Furthermore, he gave the voice of Eugene Horowitz in the series ‘Hey Arnold!’ from 2001 to 2003, and made his appearance as himself in the series ‘The People’s Couch’ in 2014 for eight episodes. Also, he sang in the church choir at Shepherd of the Hills Church in Los Angeles.

Talking about his nominations and awards, he was nominated for an Ovation Award for his performance in ‘The Little Boy’.

He has an estimated net worth of around $300k and has earned that sum of money from his professional career.

There was a rumor that he dated Brittany Ashton Holmes but neither of them has talked about the rumor.

To know more about Lizzo, Juice Wrld, and Bryan Singer, please click on the link.