Leah Pipes is an American Actress. Leah is divorced from a musician and actor, AJ Trauth. 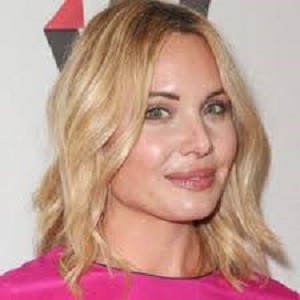 “Neither my fiance nor I take ourselves too seriously, and we want our wedding to reflect our lightheartedness.”

What is the relationship of Leah Pipes?

Previously, she was married to her longtime boyfriend AJ Trauth io December 6, 2014. He is a musician and actor. The couple tied their knot at the Four Seasons Biltmore in Santa Barbara, California. The couple married following an 11-month long engagement and their families and friends attended the ceremony.

They engaged on February 5, 2014, and married after 11 months of engagement.

However, after five years of their marital affair, the couple decided to split due to irreconcilable differences and divorced in May 2019.

She loves animals and has two dogs and a cat.

Who is Leah Pipes?

Leah Pipes is an American actress.

She is best known for her role as Camille O’Connell in the CW’s TV series ‘The Originals, the slasher movie ‘Sorority Row’ and the TV series ‘Life Is Wild’.

Leah’s star sign is Leo and she is of ‎English, German, and Irish heritage.

She was raised in Southern California with her brother and two sisters. One of her sisters’ names is Megan.

She initially wanted to be a writer but she was advised to be an actress. She is a huge fan of soccer and enjoys playing it.

Leah debuted her career as Stephanie in the ‘Angel’ in 2001 which is a spin-off of the TV series ‘Buffy the Vampire Slayer.

Then, she appeared in the main role of Sarah Davis in ABC’s sitcom ‘Lost at Home’ after two years. She portrayed a recurring role in the TV series ‘Clubhouse’ from 2004 to 2005.

In addition, Leah made her film debut in the horror movie ‘Fingerprints’ in 2006, which was directed by Harry Basil.

She portrayed the role of Jessica Pierson in the slasher film ‘Sorority Row’ alongside Briana Evigan, Rummer Wills, Jamie Chung, and Audrina Patridge. Her other notable films include ‘Conception’, ‘Into the Dark’, ‘Musical Chairs’, ‘The Devil’s Hand’, etc.

Later, she portrayed the role of a human therapist, Camille O’Connell in The CW’s series ‘The Originals’ in 2018. Her performance was highly appreciated in the series. Her other notable television works include ‘Odd Girl Out, ‘Law & Order: LA’, ‘Ghost Whisper’, ‘The Defenders, etc.

She has an estimated net worth of around $1 million as of 2022. Whereas her income from TV is estimated to be from $150k to $1 million.

Some of her fans tweeted her calling it ‘ugly’ and hoped she died after her character Camille kissed Klaus(Joseph Morgan). Later, she defended herself against the bullies and she got support from the show creator Julie Pelc in order to defend her.

She replied to those who hoped her to die as,

“This is so crossing a line. That’s a horrifying thing to say to someone. All over a “ship”? This is my job. To play pretend.”