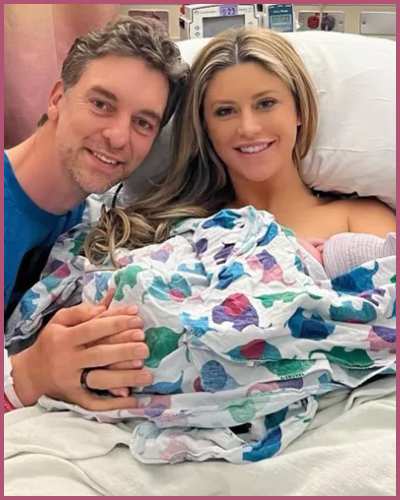 Spanish former professional basketball player Pau Gasol’s family just got a little bit bigger after the new son make an arrival in the family. Sharing the happy news of the baby, Pau and his wife Cat in a joint Instagram post in both Spanish and English on Thursday, wrote,

“Our baby boy has arrived!! We are beyond happy to welcome our son to the world. Everything has gone really well and we are officially a family of 4! 💙”

Gasol and McDonnell’s baby boy is the younger sibling of their 2-year-old Elisabet Gianna. The family of three initially posed about the upcoming new member of the family in August with a shot kissing toddler Elisabeth and spilling the big secret,

Who is Pau Gasol?

Gasol has talked about his Fatherhood journey with his daughter Elisabet

Pau Gasol’s life has changed ever since he welcomed his baby girl. Now it’s again his dad’s duty time with the arrival of a son whose name is not revealed yet. He on talking about his daughter Elisabet who arrived a year after their marriage.

Raising her is something he is enjoying as he expressed,

“I’ve enjoyed our baby girl so much. Ellie is incredible and we are looking forward to expanding our family. We’ll see what number it ends up being, so one at a time, because you don’t realize the amount of work and dedication that a kid requires until you actually have it.”

The couple had named their firstborn by paying tribute to the late father-daughter pair of his former teammate Kobe Bryant. Kobe and his 13-year-old daughter Gianna had tragically died in a helicopter crash in Calabasas, California.

Kobe’s widow Vanessa Bryant was chosen as godmother for their firstborn and they also told the middle name to her saying,

“When we told her about the middle name, Pau and I sat down together we told her over FaceTime because of COVID we couldn’t be around each other as much. … She was super happy, I think she actually started crying a little bit. I think she was honored.”