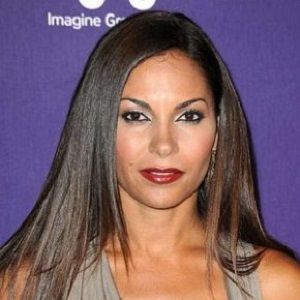 There were certain films where I went, 'Oh, my God, I'm doing a movie.'

When you're in N.Y.C. and they shut down one of the bridges, this is a movie!

I just really want to do good work and work with some great people, people who challenge me.

Indies are always an extra challenge. The time is shorter because you have less money to spend and fewer days to shoot.

What is the relationship of Salli Richardson?

Salli has been in several relationships including Sean Combs in 1991 and Matthew McConaughey in 2000.

She broke up with both of them and met Dondre Whitfield in the year 2001. After dating for several months they got married on September 8, 2002.

They have one daughter named Parker Richardson-Whitfield and one son named Dondre Terrell Whitfield. Currently, she is living happily with her husband and children.

Who is Salli Richardson?

Salli Richardson is an American actress and television personality best known for A Low Down Dirty Shame, a 1994s hit comedy/action film.

She is also popular for her role in the comedy-drama series ‘Eureka’. He is also a voice actress and acted on the Disney animated series Gargoyles as Elisa Maza and appeared in other several films.

Talking about her early life, Salli was born on November 23, 1967.  She belongs to American nationality and Afro-American ethnicity.

She experienced her childhood in Chicago, Illinois, U.S.A. She has an African American mother and his father is Irish-Italian.

As per her educational background, she attended the University of Chicago Laboratory Schools in 1985 and graduated from there. She was a tennis player in high school. She got a chance to show her acting for the first time in the Kuumba Workshop theater.

She got a chance to show her acting for the first time in the Kuumba Workshop theater.

Before getting into television and films, Richardson started her acting career in theater. Afterward, she started playing a small role in different films.

She appeared for the first time in “Prelude to a Kiss, Mo’ Money, Posse” and had a small role there, and later on, she got a major role in “Sioux City” and “A Low Down Dirty Shame”.

Salli Richardson has worked as a voice actress for the first time in the animated series “Gargoyles” as Elisa Maza. She was mainly popularized after starring in Rude Awakening and  CSI: Miami, where she had a recurring role.
Later on, she got a lead role in the independent drama “Pastor Brown” in 2009 and “Will Follow” in 2010. Some of her popular films include “Pastor Brown” (2009), “We the Party” (2012), “Anacondas: The Hunt for the Blood Orchid” (2004), and many others.

Salli Richardson: Salary and Net worth

She made a respectable position in the American film and television industry and has a net worth of 2 million and her salary is not revealed yet.

Talking about the rumors and controversy, Once there was a rumor that Salli got divorced from her husband, Dondre Whitfield. Afterward, Salli claims that the news was false and she is still living happily with her husband.

Also get to know more about the birth facts, education, career, net worth, rumors, height, and social media of different personalities like Brooke Anderson, Candace Cameron, and Brandi Glanville.