Artist The Kid Mero is married and a father of four.

The Kid Mero is living a blissful conjugal life. He is married to a New Jersey-based teacher named Heather Martinez.

The beautiful couple is blessed with four children three sons and a daughter. They celebrate their anniversary on the 17th of April however, his marriage year isn’t available. 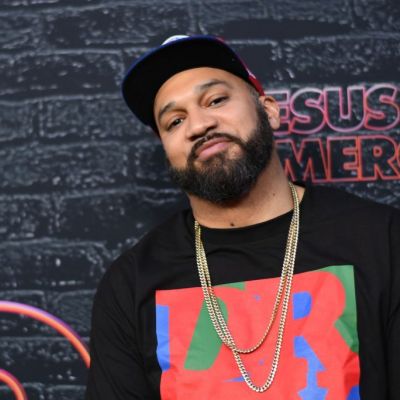 Quick Facts of The Kid Mero

Relationship Facts of The Kid Mero

Who is The Kid Mero?

The Kid Mero is a Dominican-American writer, comedian, TV personality, voice actor, and YouTuber. He gained recognition after co-starring on the podcast Desus vs. Mero aired on Complex TV alongside fellow Bronx native Desus Nice.

Mero was born on the 15th of May 1983, in New York City, U.S. His real name is Joel Armogasto Martinez. He is a native of the Dominican.

When he was young, he moved to the Bronx with his family. However, he hasn’t shared much about his parents in the media. He has a younger brother named Tito The Gawd and a sister named Miss Cibao.

Further, he is of American nationality and belongs to the Afro-Latino ethnicity.

Talking about his academic background, he attended I.S. 117 Joseph H. Wade Intermediate School in the Bronx. He then went to DeWitt Clinton High School and Bronz Community College.

Later on, Mero graduated from Hunter College, studying to be a science teacher while working as a teacher’s assistant. He later worked as a  paraprofessional at a school in The Bronx.

In 2012, Mero started writing for Vice’s music platform Noisey and published his first article, it was a review of Canadian electronic music duo Crystal Castles’s album III on November 14, 2012. He wrote a total of 69 articles for Noisey until his departure in March 2014. On December 18, 2013, he started hosting a weekly podcast show and web series, Desus vs. Mero alongside Desus Nice.

Mero broke the world record for kazoo solo in September 2014 which was revealed in an exclusive interview on “Time Crisis with Ezra Koenig”. In December 2014, MTV announced that The Kid Mero and Desus Nice would be joining the cast of Guy Code and also appeared in the first episode of season 5. Furthermore, he appeared on MTV2’s Uncommon Sense several times.

He also voiced in the 2021 musical drama film, In the Heights for the character DJ. In 2020, he starred as Tony in the comedy horror film, Vampires vs. the Bronx.

In 2019, he was awarded The Webby Awards shared with Desus Nice. Similarly, he won the WGA Award for the comedy/variety talk series, Desus & Mero in 2021.

The Tv personality has managed to maintain a clean profile to date. He hasn’t engaged in any rumors and controversial matters that create a huge buzz in the media.

The Kid Mero: Net Worth, Salary

Mero is living a lavish lifestyle. He might have earned an impressive amount of wealth from his multiple careers.

However, he hasn’t disclosed his exact salary and other earnings. As of 2022, he has an estimated net worth of $1.5 million.

Talking about Mero’s physical appearance, he has a brown complexion. Likely, he has a black pair of eyes and as well black hair color.

He has a towering height with an average weight however, the precise measurement isn’t available in the media.

The ex-wife of Tiger Woods, Elin Nordegren is expecting a child this fall with her boyfriend former NFL player Jordan Cameron