Check out these, celebrities who were diagnosed with Paranoia! 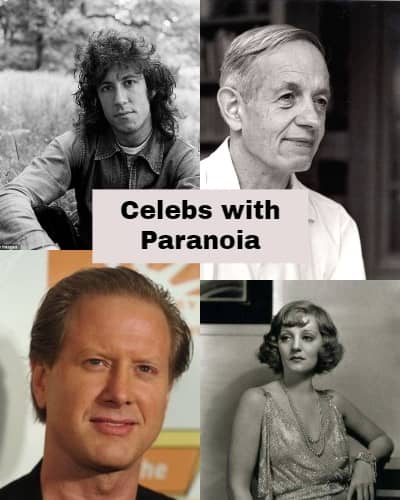 Paranoia a mental condition characterized by delusions of persecution, unwarranted jealousy, or exaggerated self-importance, typically worked into an organized system. It may be an aspect of chronic personality disorder, of drug abuse, or of a serious condition such as schizophrenia in which the person loses touch with reality.

So, these are some famous people who were diagnosed with Paranoia!

At the age of 33, Lionel was diagnosis with Paranoia. Aldridge was an American professional football player, a defensive end in the National Football League for 11 seasons with the Green Bay Packers and San Diego Chargers.

He started speaking publicly about it shortly after receiving a diagnosis. He said,

“When I started, I did it as a way to keep myself stable, But once I got well, it serves as a way to get the information out … My accomplishment is that people are hearing what can be done. People can and do recover from mental illness. The medication is important, but it doesn’t cure you. I won with the things I did to help myself and people who may be suffering now or people who may know someone who is suffering can hear that.”

The author of The Great Gatsby, Zelda also suffers from schizophrenia at the age of 30. In April 1930, Zelda was admitted to a sanatorium in France where, after months of observation and treatment, she was diagnosed as a schizophrenic.

She spent the rest of her life in and out of mental health facilities until her death in 1948. Her battles with mental health issues were publicly known. And her husband even used them as inspiration for some of the female characters in his novels.

Peter Green is a British blues-rock guitarist and the founder of the American band Fleetwood Mac. Green played the lead in Peter Bardens’ band, Peter B’s Looners, in 1966. Fleetwood Mac guitarist, Peter Green, has discussed his experiences with Paranoia publicly. While he was seemingly on top of the world with his band, Green’s personal life started to spiral out of control in the early 1970s.

He told the Los Angeles Times

“I was throwing things around and smashing things up. I smashed the car windscreen. The police took me to the station and asked me if I wanted to go to the hospital. I said yes because I didn’t feel safe going back anywhere else.”

Darrell is an American actor, stand-up comedian, and impressionist. He was a Saturday Night Live cast member from 1995 to 2009, one of the longest-standing actors in the show.

During a 2011 interview with CNN, Hammond revealed that his mother had brutally abused him throughout his childhood. He stated that this trauma from abuse led to cutting, several hospitalizations due to psychiatric issues, and diagnoses that include bipolar disorder, schizophrenia, and borderline personality disorder.

“I was on as many as seven medications at one time. Doctors didn’t know what to do with me.”

John Nash is an American mathematician working in differential geometry, game theory, and partial differential equations. The nationally acclaimed Hollywood movie “A Beautiful Mind” was made representing Nash’s life and was nominated for 8 Oscars.

Nash’s mental illness first began to manifest in the form of paranoia, his wife later describing his behavior as erratic. He was admitted to McLean Hospital in April 1959, staying through May of the same year. There, he was diagnosed with paranoid schizophrenia.

He is famous for saying,

“People are always selling the idea that people with mental illness are suffering. I think madness can be an escape. If things are not so good, you maybe want to imagine something better.”

Alexander Lee “Skip” Spence was a Canadian-born American musician and singer-songwriter. He began his career as a guitarist in an early line-up of Quicksilver Messenger Service, and was the drummer on Jefferson Airplane’s debut album, Jefferson Airplane Takes Off.

His career starts downfall after he suffers from drug addiction and mental health problems. In the late 1960s, Spence became delusional after taking too much acid. At that point, he was taken to Bellvue Hospital where he was formally diagnosed as schizophrenic. Spence died in 1999 from lung cancer, two days before his 53rd birthday.

The lyrics of his song “Littel Hand” were an outlet for speaking about his condition, The lyrics said: