Monica Malpass is an American journalist and television anchor who has the most longing career in reporting and media. She is currently single. 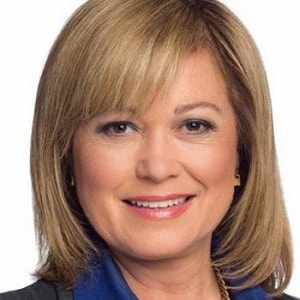 What is the relationship of Monica Malpass?

Monica Malpass is currently single. But she was once married to David Cutler who is a real estate developer and a businessman. The pair welcomed a son named Jake in 2000. On January 11, 2010, she announced that she was pregnant with twin boys and gave birth to twin boys Hunter and Zeke on April 12, 2010. But the pair could not hold the relationship and end with divorce.

After divorce, she dated Ester Auto Parts owner Steve Thorne. Steve proposed Monica with an expensive 5.06-carat solitaire which cost more than $75k. But, the engagement could not lead to the wedding. The reason behind their separation was Monica wanted to have children but, Steve, who had already children, didn’t. After that, she has not any affairs.

Who is Monica Malpass?

Monica Malpass is an American journalist and television anchor who has the most longing career in reporting and media.

She was born on April 28, 1961, in North Carolina, USA. She is currently 57 years old. Her father’s name is William Ray Malpass and her mother’s name is Winona Roberta Malpass. She was raised by her single mother along with her three siblings.

Monica holds American citizenship but her ethnicity is unknown.

She achieved a Bachelors of Arts Degree in Journalism from the University of North Carolina and achieved a Masters degree in Political Science from Villanova University. She has received two honorary Doctorate of Human Letter from Peirce College and Neumann College.

IN January 1988, she joined WPVI(Channel 6), the local ABC affiliate in Philadelphia. In 2006, The Broadcast Pioneers of Philadelphia inducted Malpass into their Hall of Fame. After working at WPVI for 31 years, she left on May 22, 2019, but it was not disclosed where she was going.

It seems Monica has not been awarded and nominated for her work till date.

She has an estimated net worth of around $5 million as of 2022, and she has earned that sum of money from her professional career. Also, she received more than $750k as a salary. In 2010, she received around $400k as a salary but now, she receives an almost double salary. Also, she adds some portion in her net worth from her own media center and invests in some media house and in share market.

There was a rumor regarding the father of her child, Jake but the sources have confirmed that her husband, David Cutler, is the child’s biological father.

Monica Malpass has a height of 5 ft. 8 inches and weighs 63 kg. She has dark brown eyes and blonde hair. She has a slim body figure and has a charming and cute look.