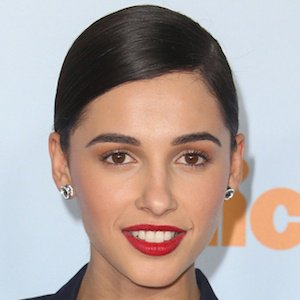 No 17-year-old is just one thing, especially in this day and age. Kids are into all sorts of things.

There are too many people around keeping me grounded to go off the rails. I'm my own person.

I'm my own person. You can't generalise about people.

Naomi Scott is a married woman. She has been married to Jordan Spence since June 2014. Jordan is an English footballer. She began dating him in 2010.

The couple has not welcomed any child yet. The couple is sharing blissful life with each other.

Previously, she was in a relationship with American actor, Mick Roux. The pair met the first time on the set of 2011 TV film ‘Lemonade Mouth’ and dated for a few months.

Who is Naomi Scott?

Naomi Scott is a famous British singer and actress who is well known for her role as Kimberly Hart in the 2017 ‘Power Ranger’.

Also, she is recognized for her performance as Mohini “Mo” Banjaree in the Disney Channel original film ‘’Lemonade Mouth’.

She was born on May 6, 1993, in London, England. Her birth name is Naomi Grace Scott ad she is currently 26 years old. Her father’s name is Christopher and her mother’s name is Usha.

Naomi’s father is of English descent and her mother was born in Uganda and of Gujarati Indian descent. She has got an older brother named Joshua. Naomi’s parents are pastors at the Bridge Church, Woodford, in Redbridge. She loves dancing, singing, and playing the piano.

Naomi holds British citizenship but her ethnicity is a mix of Indian and English.

Talking about her education history, she attended Davenant Foundation Schol in Loughton, Essex.

Naomi Scott started singing along with the Bridge Church Youth Band. She regularly performed in school musical and drama productions. She was later discovered by Kelle Bryan who is a British pop singer. During she was attending Bryan’s performance, he signed her as a client.

After that, she released three Eps and they were named as ‘Invisible Division’, ‘Promises’, and ‘Vows’. Furthermore, she released her singes: ‘Motions’, ‘Lover’s Lies’, ‘Irrelevant’, and many more.

Similarly, Naomi Scott debuted her acting career from the Disney Channel UK series ‘Life Bites’. Similarly, she made her appearances in the movies and series like ‘Lemonade Mouth’ in 2011, ‘Terra Nova’, ‘By Any Means’ in 2013, ‘Lewis’ from 2015 to 2016, etc.

She made her breakthrough from the role of Kimberly Hart/Pink Ranger in the film ‘Power Rangers’ in 2017. After that, she appeared as Princess Jasmine in ‘Aladdin’ released in May 2019.

She was nominated for Teen Choice Award in the category Choice Movie Actress: Sci-Fi for ‘Power Rangers’ in 2017.

She has an estimated net worth of around $1.3 million and she has earned that sum of money from her professional career.

As the film ‘Aladdin’ was taken shot in the country of Arab, viewers expected the actress to be selected from the Arabian countries. She is considered to be to white for the role and Dinsey was heavily criticized.

Naomi Scott has a height of 5 ft. 6 inches and weighs 50 kg. Also, Naomi Scott has dark brown eyes and black hair. Her body measurement is 33-26-35 inches.

To know more about Billy Magnussen, Lil Dicky, and Summer Walker, please click on the link.