WWE player Sika Anoa'i is married and a father of five.

Sika Anoa’i was married. He exchanged vows with Patricia Hooker but their wedding details are unknown. This couple has two children.

Their son Matthew died in 2017 and Leati Joseph aka Roman Reigns is a popular wrestler. As per the sources, Sika was also involved with other relations.

From his past affairs, he has three daughters, Lani, Vanessa, and Summer. 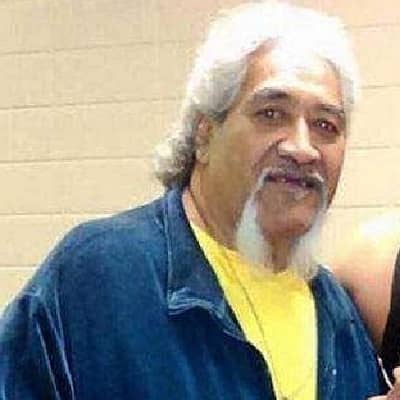 Who is Sika Anoa’i?

Sika Anoa’i is an American Samoan WWE wrestler who is now retired. He is from a wrestler family and has won many championships.

Sika’s brother Afa and his son Roman are also professional wrestlers. He has appeared in the wrestling comedy Body Slam (1987).

Sika Anoa’i was born as Leati Sika Anoa’i Amituana’i on 05 April 1945 in Leone, American Samoa. He belongs to Samoan ancestry.

His mother was Amituana Anoa’i and his father’s name was Tovale Anoa’i. He has thirteen siblings. some of their names are Siblings: Afa Anoa’i, Vera Fatu, Junior Anoa’i, Vera Anoa’i, Tumua Anoa’i, and Afoa Anoa’i.

Regarding his academic information, he has not provided any details about it.

Sika Anoa’i used to work as a stevedore before entering the fighting world. He had also worked for many ships and boats in his early days. After getting trained by Afa and Kurt Von Steiger, he debuted in wrestling in the year 1973.

They all called themselves The Wild Samoans and entered WWE in 1980. They after then fought in several championships organized by Mid-South Wrestling, NWA All-Star Wrestling, Gulf Coast Championship Wrestling, Stampede Wrestling, and many more.

Then after Afa retired, Sika started to fight as a single in 1986. In the same year, he lost a match against Pedro Morales. In 1987, wrestler S.D. Jones defeated Sika. The regular competitors of Sika were Lanny Poffo, George Steele, and Hillbilly Jim.

After being in WWE for 15 years, he announced his exit from wrestling. After his retirement, he started to train other wrestlers at the Wild Samoan Training Center.

This musical artist has an estimated net worth of $1 million US. But details about his salary and other incomes are behind the curtains.

However, his son Roman Reigns has a net worth of around $12 million.

This veteran wrestler is doing great in his family and professional life and is not surrounded by any scandals or rumors.

However, in March 2002, he had faced an accident when a beer truck hit his car. He had head and facial injuries.

Regarding Martin Sika Anoa’i’s body features, he has light brown eyes and grey hair. His height is 56 ft 2 inches and his weight is 145kg.

Other details of his shoe and dress are unknown.