Amy Fadool is a News Personality, Sports anchor/reporter for @nbcsphilly. Amy is married and a mother of one. 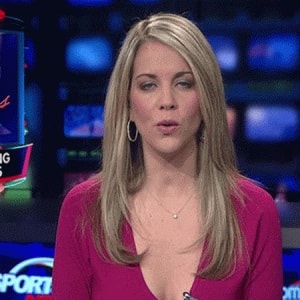 Amy Fadool is a married woman. She has been married to Sean Kane since 2012.

Sean is the senior producer of the NBC Sports Philadelphia and the couple has welcomed a son named Sean Jr.

The couple is living together and they are spending quality time with each other.

She currently lives in South Philadelphia with her family in her beautiful home.

Amy Fadool is an American sportscaster. She is currently working for Comcast SportsNet also called NBC Sports. She previously worked for WKYT, Orioles and The Ravens, WZTV, and Fox Sports Network.

She was born on July 27, 1977, in the USA. She is currently 43 years old. Her father’s name is Tony Fadool and her biological mother’s name is unknown.

She lost her mother and brother and she currently assumes her step-mother, Winnie Fadool as her mother. Amy spent her childhood with her two step-brothers Lewis and Perry. She also has a step-sister, Elizabeth.

Amy’s favorite sports are football and college basketball. She is also an animal lover and she is also active in charity work. Amy holds American citizenship but her ethnicity is unknown.

She completed her school from Midlothian High School in Virginia, and later joined the University of Kentucky and achieved a Bachelor’s degree in broadcast journalism and sports specialty.

She made the website and donation pages for the reunion of the class 1995. Also, she launches a lunch counter during her high school in Virginia and also did an intern at the WKYT in her sophomore year.

After graduation, she began her carrer working for the WKYT. She was self-proclaimed gopher and she filmed, edited, wrote and produced for the WKYT Network.

Later, she worked as a weekend sports anchor for the WZTV and moved to Nashville, Tennessee and worked with the Network for two years.

Likewise, Amy Fadool also reported for the Orioles and The Ravens as their weekend anchor. She frequently airing for the Fox Sports Network.

Then, she began working for the NBC Sports Philadelphia formerly known as SportsNet and worked as their reporter for sports and news section. Along with that, she also writes for the Company’s website.

In addition, she is the chairperson of the Philly Golf Classic, an American golf tournament that raises fund for the American Cancer Society.

She is an Emmy Award winner sports anchor and reporter for NBC Sports Philadelphia.

She has an estimated net worth of around $1.5 million and she has earned that sum of money from her professional career. Also, she earns around $100k per years from the network. She also earns a small portion of money from her radio and TV guest appearances as a sports pundit.

She does not like to harm other celebrity and has not been involved in any types of rumors and controversies in her career.