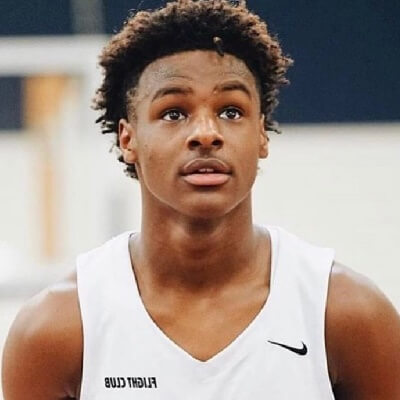 Bronny James is single. He is focused on his career as of now. He is very private and has not revealed any of his girlfriends on his social media sites.

Besides, rumors are that Bronny’s alleged girlfriend is Peyton Sama. Peyton is a The Vault House member. However, the couple has not confirmed.

Who is Bronny James?

Bronny James is an American basketball player who plays for Sierra Canyon School. He is well-known as the oldest son of NBA legend and one of the greatest basketball players of all time, LeBron James.

Bronny James was born on October 6, 2004, in Cleveland, Ohio. As of 2020, his age is 16. He was born to parents LeBron James (father) and Savannah Brinson (mother). LeBron was 19 when he became a father to Bronny. The couple was not married at the time of his birth.

His father, LeBron is widely considered as one of the greatest basketball players of all time and is often compared to Michael Jordan. He is a three-time NBA champion and a four-time NBA MVP. Currently, he plays for the Los Angeles Lakers.

As a child, Bronny loved playing several sports including basketball and soccer but for safety concerns. LeBron did not allow him to play American football or ice hockey. At the age of 10, James was featured in basketball highlight reels. His godfather is NBA legend, Chris Paul.

Talking about his education, James went to Old Trail School in Bath Township, Summit County, Ohio. After that, on August 6, 2018, he joined Crossroads School, a private school in Santa Monica, California. From there, he transferred to Sierra Canyon School.

Bronny James competed with various Amateur Athletic Union basketball teams before playing for his high school team. At the age of nine, he played for the Miami City Ballers tournament. In June 2015, he led his team to a fourth-grade championship at the League Dallas/Hype Sports Summer Jam.

On August 6, 2018, he enrolled at Crossroads School. On December 3, 2018, after being eligible to play his first game for the school, Bronny scored 27 points in a victory over Culver City Middle School.

In April 2019, despite being younger than most of his competitors, he joined the AAU team Strive for Greatness at the under-16 Nike Elite Youth Basketball League and for his performances, drew a lot of attention and praise.

On May 29, 2019, he transferred to Sierra Canyon School in Chatsworth, Los Angeles for his freshman high school year. He was accompanied by his brother Bryce and Zaire Wade, son of the longtime teammate of LeBron, Dwyane Wade.

Similarly, on January 15, 2020, he scored 17 points in a win over Viewpoint School. As a freshman, James was impressive averaging 4.1 points in 15 minutes per game.

How much is Bronny James worth?

Bronny has a net worth of $10 Million. His father is one of the richest and best-paid athletes in the world with an estimated net worth of around $480 million. With endorsements, LeBron’s annual income is estimated at around $94.2 million.

Bronny James stands at a height of around 6 feet 2 inches. He weighs around 80 kg. His hair color is black and his eyes are dark brown in color.

James has not been involved in any controversies. He has been able to keep himself away from any type of controversy and scandal. So far, he has not done anything controversial in his career. Similarly, there are no rumors about him.

Bronny James is active on social media sites. He has around 7.4k followers on Twitter. Similarly, he has around 5.8 million followers. There are several fan pages of him on Facebook but he does not seem to have an account on Facebook.

You may also like to read the Bio, Career, Net Worth, Body Measurements, Relationships, and more about LeBron James, James Harden, Dwyane Wade, and more.