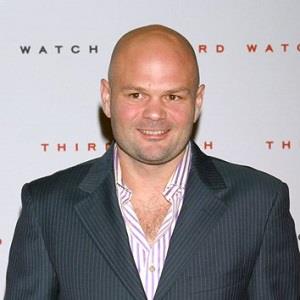 Frank Sobotka in 'The Wire' on HBO was one of the greatest characters I've ever played. They cut his throat at the end of that season. There's something about creative coupling that seems to go with great characters, and the fact that you can never play them again once you're done

The Emmys seem like an entity unto themselves that have an agenda that sometimes corresponds to quality, sometimes doesn't

I am the kind of actor who will do just about anything.

Past relationships with Chris Bauer are a mystery to his worldwide fans.

He has seldom spoken about this matter in any of his interviews and no official information can be found regarding the matter on the internet.

Chris is currently married to Laura Bauer who is a writer and costume designer.

The couple tied the knot on 12 May 1997 and are happily married to date.

They have 2 children, Beau Bauer and Mercy Bauer from this marriage.

They have been married for more than 20 years and no news regarding divorce or any extramarital affairs is known which proves that the marriage is stable.

Who is Chris Bauer?

Chris Bauer is an American actor mostly known for his role as Frank Sobotka in ‘The Wire’.

He has appeared in numerous movies and television series like ‘True Blood’, and ‘Third Watch’ and has more than 70 credits to his name as an actor.

Chris was born in Los Angeles, California on October 28, 1966, and is of Irish and German descent.

Not much information is known about his parents and siblings.

Chris attended Miramonte High School in Orinda, California, and also played on the Miramonte football team in his senior year.

He was later enrolled at the University of San Diego, the American Academy of Dramatic Arts, and graduated from the Yale School of Drama later on.

Chris first appeared in the television series ‘A Fine Romance’ in which he played the role of a Crewman.

In 1989, he appeared in the television series ‘Midnight Caller.

After his appearances in smaller roles, he was later able to grab major roles in numerous movies and television series in his career.

Chris won the Special Achievement Award in 2009 for ‘True Blood’.

He was also nominated for ‘Screen Actors Guild Awards in 2010.

Chris Bauer: Salary and Net Worth

He has a net worth of $ 1.5 million but her salary is not revealed yet.

Chris was involved in controversies due to his past which consisted of horrible years due to his addiction to drugs and alcohol.

No rumors surrounding Chris have emerged as of yet.

Chris has a height of 6 feet 2 inches. He is bald.

His body weighs 96kg. His eyes are Light Brown in color.

Also get to know more about the birth facts, education, career, net worth, rumors, height, and social media of different personalities like Robby Stahl, Miles Mussenden, and Craig Strong.