Chris Klug is a professional alpine snowboarder. He is married to Melissa and he is the father of two children.

Chris Klug’s current relationship status is married. He is married to Melissa April in 2006. The couple is blessed with two children.

The family is currently residing in Aspen, Colorado. 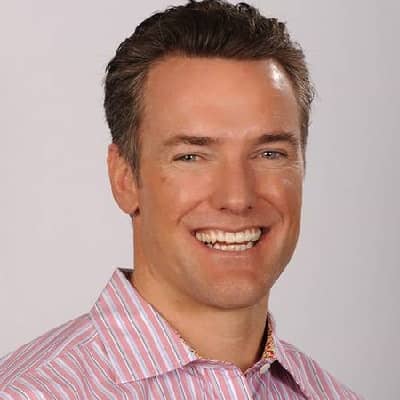 Who is Chris Klug?

Chris Klug is a professional alpine snowboarder. He has his liver transplant on July 28, 2000, and also continued his career after the transplant.

He was the first transplantee to compete in the Olympic Games and won a bronze medal after receiving a liver transplant in 2000.

Further, he founded The Chris Klug Foundation and has also To the Edge and Back: My Story from Organ Transplant Survivor to Olympic Snowboarder.

Chris was born on November 18, 1972, in Vail, Colorado. His father’s name is Warren Klug. Likely, his mother’s name is Kathy Klug.

His family moved to Bend, Oregon, in 1976. There, his father bought a hotel called the Inn of the Seventh Mountain.

He holds an American nationality and belongs to mixed (English and German) ethnicity.

He completed his high school education from Deerfield Academy in Deerfield, Massachusetts, and graduated from Colorado Mountain College.

Chris Klug won his first tour victory from the high school in 1988. He has back to back win after that in the championships of the North West Race Series.

In 2002, he competed in Winter Olympics in Salt Lake City, winning a bronze medal in the Parallel Giant Slalom. This was the first time that a transplantee had competed in the Olympics.

Also, he won a bronze medal and lit the torch at the 2002 National Kidney Foundation U.S. Transplant Games. He is an alumnus of Deerfield Academy. Moreover, he beat out silver medalist Danny Davis in the Dual Salom at the Winter X Games in 2016.

The Chris Klug Foundation was founded in 2013 and by Chris Klug himself in Aspen, Colorado. He founded it with an ambition to save lives and advertise a healthy, active life after the transplant.
The foundation’s programs are organized inspiring and influencing thousands of young adults by sharing facts and information about organ and tissue donation.

It has able to spread donor awareness at several events throughout the year. The foundation has an organ during the Winter X Games and during their own popular event called, Summit For Life a nighttime uphill race up Aspen Mountain.

His snowboarding career and transplant experience have a lot of stories to be shared and inspire others.

Further, he shares his inspirational story as a professional corporate and motivational speaker. Chris shared his message with thousands at over five hundred events nationwide the past decade.

Chris is an Owner and President of Klug Enterprises, Inc., a marketing and sales firm.

Chris created the Aspen Summit for Life in 2004. From it, he raise awareness and funds for organ donation awareness.

In addition, he has owned and operated Klug Riding, an eCommerce website. Klug is also a licensed Real Estate Broker with Aspen Snowmass Sotheby’s International Realty in Aspen, CO.

In 2004, Klug released his autobiography, To the Edge and Back: My Story from Organ Transplant Survivor to Olympic Snowboarder.

Being one of the successful personality, his net worth is around $11 million as of 2022.

Chris has solely focused on his career and avoids any of the media rumors and controversies.

Chris Klug stands tall with a height of 6 ft 3 inches and weighs 95 kg. He has brown colored hair and grey colored eyes.

Also, get to know about Arielle Vandenberg, Lisa Kennedy Montgomery, and Will Kopelman.

Hope Lee, A Baby Who Died After 1 Hour Of Birth Crowned As A Youngest Organ Donor!