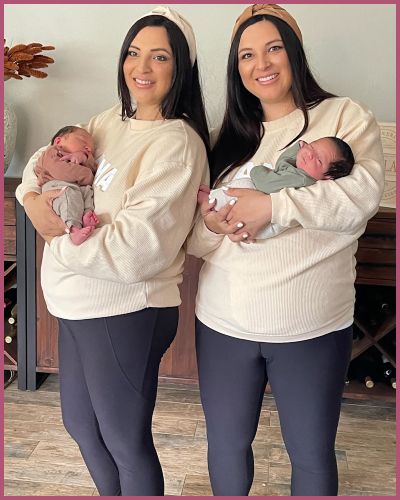 What Just Happened in The Life of The Identical Twins?

The identical twins, Jill and Erin age 30, who grew together became mothers on the same day May 5, 2022, just 5 hours apart.

One went through early delivery through Cesarean section due to breech position complication while the other water broke.

Both sisters welcomed sons, Oliver and Silas weighing 7 pounds, 3 ounces, and measuring 20 inches at Kaiser Permanente Hospital in Anaheim. The birth timings are 11.31 am in the morning and 6.39 pm in the evening.

Though Erin and Zach moved to Yorba so that the babies could grow together with Jill’s upcoming baby. The couple had no idea they will be sharing the same birthdays.

Jill’s baby was scheduled but Erin was coming into labor any time soon so. she called her husband as she reports,

“Okay, this isn’t a joke. My water just broke. I’m going to need you to come home from work and take me to labor and delivery.”

While she also called Jill about whats going on saying,

“Okay, this isn’t a joke, but I’m pretty sure my water just broke”

During the whole scenario Jill was like come on we will see you there in the hospital and it’s alright.

Jill Justianani – views on the Coincidence

“We played together, slept together, ate together. My parents would talk about how we had our own language together. We’d be in our cribs side to side and make these cooing sounds. I’d make a sound and Erin would respond.”

“It just feels like it was supposed to be. It is a little surprising because what are the odds? But it’s like, of course this would happen to us.”

Also, Read ‘Feels Like a Bit of a Miracle’ Beau Dunn Is Welcoming Twins via Surrogacy

Erin Cheplak- views on the Coincidence

“Being identical twins, Jill and I know no difference, other than spending all of life’s journeys together. It’s an experience that has been amazing and it’s something that Jill and I cherish so much.”

Meanwhile, she continued expressing such a surprising blessing exclaiming,

“We’re each other’s best friends and to know that our sons are going to grow up with the opportunity for a similar experience is a huge blessing. We’re so grateful for that.”

Back in July 2016 The identical twins, Sarah Mariuz and Leah Rodgers each gave birth to their first child early Thursday.

Firstborn of the both were born at the same exact time but in their respective time zone. Rodgers gave birth first, to a  baby boy at 1:18 a.m., in Denver, Colorado, while Mariuzwelcomed a daughter at 1:18 a.m., in La Jolla, California.

Is it some kind of karma or destiny of the identical twins? Well, if not also it’s a thrilling coincidence.
Also, Read Jack and Jill; identical twins confusing the viewers. Know about Jacqueline’s marriage and difficulty with children!!
Tags : Identical twins Kaiser Permanente Hospital in Anaheim. Twins became mother on same day