Hasnat Khan was involved in a two-year relationship with Diana, Princess of Wales. The pair had begun dating in the late summer of 1995. They later separated in June 1997.

Although Khan has mostly remained silent regarding the relationship, the book ‘Diana: Her Last Love’ provides light to the pair’s romantic relationship.

Later, Khan married Hadia Sher Ali in Pakistan. It was an arranged marriage. The wedding ceremony took place in May 2006. However, they filed an application for divorce in July 2008 in the local arbitration council of Islamabad. 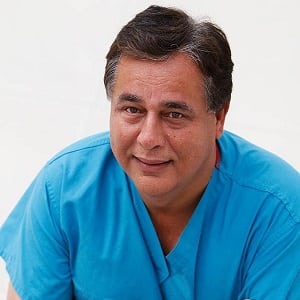 There are a hundred could-have-beens. I can't change anything now.

I think that if Diana were alive today, we would have remained very good friends, whatever she did and whomever she was with.

It is a huge loss when someone very close to you dies. I do not know what Diana was like in other relationships but she protected me very well, not just from the media but also from a lot of information. Perhaps she protected me because she thought we had a future together.

Who is Hasnat Khan?

Hasnat Khan is a British-Pakistani heart and lung surgeon. People mostly know him for his relationship with Diana, Princess of Wales. The pair’s romance is the subject of the book ‘Diana: Her Last Love’.

Khan was born in Jhelum, Pakistan on February 3, 1958. He was born to parents Rashid Khan and Naheed Khan. His father is a graduate of the London School of Economics who ran a prosperous glass factory.

Khan is of British and Pakistani nationality. Furthermore, there are no details available about his ethnic background at present.

Talking about his education, Khan attended the Imperial College School of Medicine and the London School of Economics.

Hasnat Khan initially worked in Sydney, Australia. Later, after 1991, he began working in London. From 1995 to 1996, he served at the Royal Brompton Hospital in London. Additionally, he later began working at the London Chest Hospital. After working at Harefield Hospital, he resigned from the post in November 2007 and began to head a cardiac hospital in Malaysia.

Furthermore, currently, Khan is reportedly serving as a consultant cardiothoracic surgeon at Basildon University Hospital. He garnered widespread fame due to his relationship with Diana, Princess of Wales. Their relationship was portrayed in the film ‘Diana’.

Khan has not revealed his current salary. Additionally, there are no details available relating to his estimated net worth at present.

Khan became part of controversy due to his comments about the movie ‘Diana’ which is based on his relationship with Princess Diana. Khan accused the movie of portraying lies relating to their relationship. At present, there are no rumors concerning his life and career.

Talking about his body measurement, there are no details available relating to Hasnat Khan’s height and weight. His hair color is black/grey and his eye color is dark brown.

Khan is not active over social media. He does not have his official Twitter and Instagram accounts. Additionally, he is not active on Facebook as well. However, he has several fan accounts on social sites.

The fateful morning when Princess Diana died! What happened at the summer castle of Queen Elizabeth II?