Holiday Preparation!! Pamela Anderson And Her Boyfriend Adil Rami To Celebrate Their First Christmas Together

The Canadian American actress and model Pamela Anderson are all set for the Christmas. She and her boyfriend Adil Rami are celebrating their first Christmas together this year.

She will spend this holiday with love of her life, soccer player Adil. Here are the further details about the news and their holiday plans.

Update: Pamela and Adil are no more dating. The news of their breakup was in the media in June 2019. The couple split after having an affair for to years. Pamela dumped Adil for cheating on her.

Pamela Anderson and Adil Rami are celebrating the first Christmas together

Pamela Anderson is spending her holiday with her boyfriend Adil Rami. She has some special plans for this Christmas with Adil.

According to the source, she will be traveling to Malibu together with her boyfriend and her children Brandon and Dylan for the Christmas celebration.

“The boys have previously met Adil and they fully approve of him for their mom,”

The duo who met this year in Cannes is inseparable since then. Pamela has moved to Marseille to live with him. Though the couple has the 19-years of the age difference, it does not matter to them. Furthermore, the source also mentioned:

“Adil says Pamela is ‘an alien’ in the sense she is without age and on a constant quest to save the world. Age is a non-issue for them!”

Moreover, the pals of the soccer player, Adil also revealed that the duo is madly in love with each other. Meanwhile, they also said that they count the days to be together whenever they are far from each other.

Recently, Pamela was spotted at Chrome Hearts in Paris checking out engagement rings. While the source added:

“She loves Chrome Hearts aquamarine — and she hates blood diamonds,”

You may like to read Pamela Anderson turns 52, her golden age and her romantic relationships: Revealed here! Her split with boyfriend Adil Rami

Pamela arrived at the airport to fly out of London Heathrow Airport. She gave a style goal for her airport look. Pamela appeared on a faux fur powder blue coat over a cream dress teaming up with the thigh-high black boots.

She took the bustling terminal ahead of her flight back to California. Furthermore, for her airport look, she kept her hair loose waves with the addition of a pair of cat-eye sunglasses. She looked even more beautiful with the natural makeup.

Not only as an actress but Pamela has also enjoyed her success as a model and now she also works for animal rights through her nonprofit organization, The Pamela Anderson Foundation. Moreover, she also flew solo when she launched the collection in London on Tuesday evening.

Pamela Anderson is a Canadian American actress and model. People mostly recognize her for her roles on the television series ‘Home Improvement’, ‘Baywatch’ and ‘V.I.P.’. Additionally, she rose to fame as Playmate of the Month for Playboy magazine in February 1990. More bio…

Pamela Anderson Called It Quits With Jon Peters In 12 Days Of Their Secret Marriage; What Went Down?
Tags : American-Canadian actress 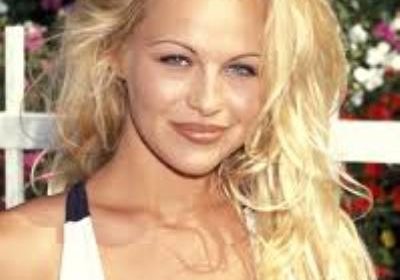