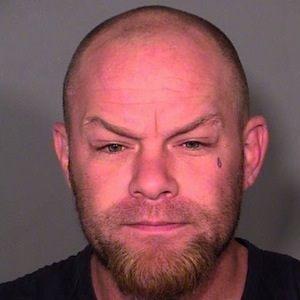 The prominent actor Ivan Moody is a divorced man. Prior he was married. He was married to married to the singer, Holly Smith. There is no information regarding his wedding the date and venue. But recently he had been separated from his wife as she had filed for divorce, claiming Moody was violent during their marriage.

There is no information regarding his past history, future plans as well as about his kids.

Who is Ivan Moody?

Ivan Moody is a singer, musician, music producer, as well as an actor. He is famous for the pseudonym Ghost which is the lead vocalist for American heavy metal band Five Finger Death Punch.

Furthermore, he had starred in the films Bled as Incubus, and The Devil’s Carnival as the hobo clown. He had even performed for several bands before settling down with Five Finger Death Punch.

Ivan Moody born on 7th January 1980 in Denver, Colorado, U.S. He belongs to the American nationality.

His birth name is  Ivan Lewis Greening. He used to spend several summers with his grandmother in La Crosse, Wisconsin. Besides this, there is no information regarding his childhood, education, and family.

Ivan Moody: Professional Career, Awards, and a Net worth

Ivan had started his career since 2001, where he joined his first band called Toiz. The next year (2002) they had played a few shows around the Los Angeles area and made a demo which was not released. Then he had joined the nu metal band Motograter and they had released their self-titled studio album of the same name in 2003.

Likewise in 2005, he had joined the heavy metal band Five Finger Death Punch. In 2009, they had released their second album, War is the Answer which sold more than 44,000 copies in its first week of release, spawned 5 top 10 singles and has gone on to sell more than 700,000 copies to date. In the same year, he had even played in the horror film Bled. The Wrong Side of Heaven and Righteous Side of Hell Volume One was released in 2013.

Similarly, in 2012, he had co-starred with Shawn Crahan in Darren Lynn Bousman’s short horror musical film The Devil’s Carnival. Then he had announced that he would be forming a new band, called “Villain” in 2017. The same year (2017) he stated that their set in Tilburg, Netherlands will be his last show with Five Finger Death Punch.

There was a controversy that his sister took out a restraining order against him and a woman saying his wife made accusations of physical abuse in 2015. He had even was temporarily replaced by Phil Labonte from All That Remains.

He has dark brown hair, has a pair of attractive blue eyes and a height of 6 feet. Apart from that, there is not any information regarding his other body measurements.