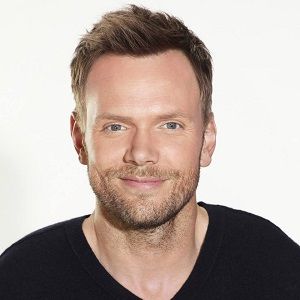 In prison, inmates sometimes use Cheetos and grape juice as makeup. I wouldn't use that beauty regimen around Britney Spears - she might lick your face off

If you have a dream, just lie about it. Lie your way unto your dreams

My goal and my career is definitely not to be famous. That's a really horrible goal, just to be famous for the sake of having fame.

Who is the wife of Joel McHale?

Joel McHale is a married man. He tied the knot with his girlfriend Sarah Williams.

They got married on 20 July 1996 after dating for a year. They also have two sons Edward Roy McHale and Isaac Hayden McHale.

Since their marriage, they have maintained a sound relationship between them and have never been involved in any disputes.

Furthermore, the married couple has been spotted together several times.

Moving toward his past relationship, he has never been linked up with any woman. Currently, Joel and Sarah are enjoying their married life and living elegantly.

Who is Joel McHale?

Joel McHale is a famous comedian, actor, and host. He is famous for hosting The Soup as well as playing Jeff Winger on the NBC/Yahoo! sitcom Community.

Furthermore, he has also appeared in a couple of films including Spy Kids: All the Time in the World and Ted.

Additionally, he has won BTVA People’s Choice Voice Acting Award in Best Vocal Ensemble in a Video Game for Lego Dimensions and the TV Guide Award for Community.

Talking about his nationality, he is American and his ethnicity is mixed (Irish, Norwegian, Finnish, English). He is the son of Jack McHale and Laurie McHale.

Furthermore, he grew up in Seattle, Washington, and Haddonfield, New Jersey along with his parents.

Concerning his education, Joel joined Mercer Island High School and later earned a bachelor’s degree in History from the University of Washington.

During his college days, he used to play football as a walk-on. Additionally, he completed his Master of Fine Arts degree from the Professional Actors Training Program at the University of Washington.

Joel McHale began his career as a comedian. Initially, he was part of Almost Live! the cast which was a local sketch-comedy television show.

Later in 1993, he became a member of the improv comedy group Unexpected Productions in which he starred for almost four years till 1997.

After completing his master’s degree, he started acting which he played some minor roles in Diagnosis: Murder, CSI: Miami, and Will & Grace.

Back in 2004, the famous comedian started hosting a television show on the “E!” television network named The Soup. Later, he made a guest role on The Adam Carolla Show and Mickey and Amelia.

He is famous for hosting The Soup as well as playing Jeff Winger on the NBC/Yahoo! sitcom Community.

Furthermore, he has also appeared in a couple of films including Spy Kids: All the Time in the World and Ted.

Moreover, he has also starred in several films including Assassination Nation, Blended, The Big Year, Deliver Us from Evil, and a few more.

In addition, Joel played the role of Rex in the huge hit comedy Ted starring Mark Wahlberg and Mila Kunis.

Some of his notable TV series include CSI: Miami, The X-Files, Milo Murphy’s Law, Dimension 404, and a few more.

Some of the recent ventures include Santa Clarita Diet, The Joel McHale Show with Joel McHale, and a few others.

Being a popular actor and host, Joel earns a handsome amount of money from his profession.

Currently, he has a net worth of $14 million.

As of now, he has won BTVA People’s Choice Voice Acting Award in Best Vocal Ensemble in a Video Game for Lego Dimensions and the TV Guide Award for Community.

Back in 2013, there was a huge rumor that he is gay. However, it came false and denied the news.

Besides this, he has never faced any controversy in his career to date.

Joel McHale has a towering height of 6 feet 4 inches and his weight is unknown.

Moreover, he has a pair of blue eyes and brown hair. Besides this, there is not any information regarding his other body measurements.