Judy Reyes is a renowned actress, actress, model, and producer. She is currently in a relationship.

Judy Reyes is currently in a relationship with her longtime boyfriend, George Valencia. George is a director and writer by profession.

The beautiful couple started dating in 2008. A year after, she announced her pregnancy with George and welcomed their first child named Lelia Rey Valencia on November 27, 2009.

Previously, she was married to cinematographer, Edwin M. Figueroa. In 1997, the pair exchanged vows in an intimate ceremony. Their marriage did not last long and got divorced in 2008 citing irreconcilable differences. 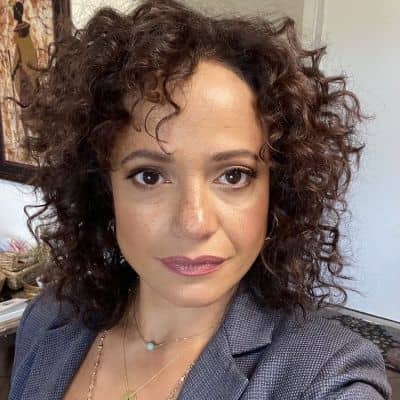 Something as unique as 'Scrubs' is a tough act to follow. It's hard to find something that good that you want to really make a commitment to.

My mother was a very hard-working maid, and their stories are worth telling.

Television has been very good to me. I grew up on it, and it had quite an impact on me. I'm entertaining opportunities that are coming my way.

Who is Judy Reyes?

Judy Reyes is a renowned actress, actress, model, and producer. She rose to fame for her roles as “Carla Espinosa” on the NBC/ABC medical comedy series, Scrubs and “Zoila Diaz” in the Lifetime comedy-drama Devious Maids.

She is starring as Annalise “Quiet Ann” Zayas in the comedy-drama television series, Claws aired on TNT.

The actress was born to Dominican parents but hasn’t shared much about her parent in the media. She has a fraternal twin sister named Joselin Reyes who is also an actress by profession.

Judy has also a younger sister named Fidias Reyes. Talking about her academic background, she went to Hunter College in Manhattan.

Further, she holds an American nationality whereas she belongs to Latino ancestry.

Judy began her music career during her college year. In the early 1990s, she made her first television appearance in an episode, Sisters of Mercy of Law & Order where she portrayed the role of Maria Barragon. The same year, she got her first role as Rosie in the film Jack and His Friends.

She then guest-starred in numerous television series such as Street Justice (1993), As the World Turns (1994), The Cosby Mysteries (1994), New York Undercover (1994), CBS Schoolbreak Special (1995), NYPD Blue (1996). From 2011 to 2009, she portrayed the role of Nurse Carla Espinosa on the NBC series, Scrubs. Similarly, she has had a recurring role in the comedy-drama series Devious Maids where she portrayed the role of Zoila Diaz.

Judy has managed to maintain a clean profile. She has never been part of any sorts of rumors and controversial matters that could hamper his personal and professional life.

Judy’s primary source of income is her acting career. As of 2022, she has an estimated net worth of around $6 million. Further, her salary and other earning are still under review.

The actress stands at the height of 5 feet 4 inches tall and her weight is about 53 kg. Likewise, she has a dark brown pair of eyes and as well dark brown hair color.

However, she often colored her hair in different shades. She has freckles on her nose and cheeks.