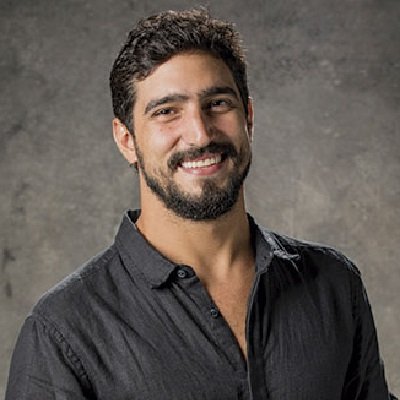 Renato Goes is happily married to Thaila Ayala. His wife, Thaila is an actress by profession.

The couple married on October 5, 2019, at the church of Carmo Church of Olinda. After the ceremony, the couple a reception party at Ricardo Brennand Institute in Recife.

The couple started dating each other in November 2017. After dating for a year, the couple got engaged on New Year’s Eve of 2018.

Previously, he was dating the actress and comedian Tatá Werneck. They dated each other in 2015. Before that, he was in a relationship with an actress, Emanuelle Araújo for a small time interval in 2010 which ended in 2011.

Who is Renato Goes?

Brazilian Renato Goes is an actor. He is renowned as Renato Reis of Dark Days, Jamil Zarif if Orphans of a Nation, and Santo of Old River.

Last, in 2020, he appeared in the TV series, Diário de Um Confinado as Samuca.

Next, he will be appearing in the movies; O Auto da Mentira and Lilith as Adao. Both of his movies are in the stage of post-production.

Renato Goes was born on 19th December 1986 in Recife, State of Pernambuco, Brazil to Regina Góes. His is of Dutch-Germanic ethnicity with Brazilian roots. He is Pernambuco by birth.

Since childhood, he was in the love with the idea of taking pictures and working with the local commercials. Hence, by the age of 15, he started making his appearance in the various TV commercials.

During his appearance, in such commercials, he was determined to be an actor.

Talking about his educational background, he completed a bachelor’s degree from Escola SESC de Teatro with Honors in Theater.

The year, he started his journey on the Television with the series, Foot in the Javkfirt. However, his character in the series was only limited to a single episode. By the time, he has already made his appearance in the short film, The Test and Jesus the Birth.

After that, he mostly appeared in the short films in the year 2007. The name of his shorts includes The World I See, Black and White Romance, Virtual Sex, and Cinema is the Greatest Fun.

The following year, he appeared in the TV series, The Restaurateurs (originally Água na Boca) in the leading character as Raí which became one of the milestones in his acting career.

After that, he had his appearance in the Brazilian soap opera, The Enchanted Tale as Fausto Peixoto. In 2016, he appeared in the soap opera, Velho Chico in the first phase of the soap. For his character, he received a nomination in the Extra Television Award.

Besides that, he is also popular for his movies like Behind the Sky, Dirty Canasta, and The Body is Ours.

Renato Goes has black eyes with brunette hair. He stands at a height of 5 feet 11 inches and has a decent weight.

You may also read the bio of Alan Ferguson, Bart Johnson, and Morgan Spector.