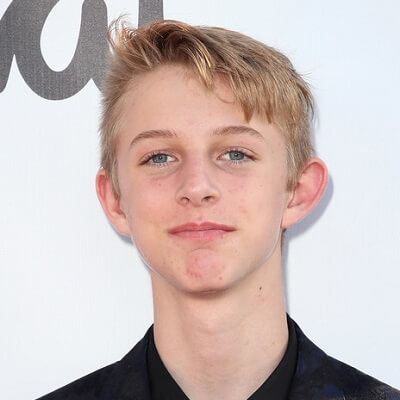 Rush Holland currently seems to be single. He is focused on his career and his studies as of now. He has not revealed any of his past affairs on his social media accounts.

Who is Rush Holland?

Rush Holland is an American actor, singer, and social media personality. He is known for his works in Chicken Girls, Chicken Girls: The Movie, and Intern-in-Chief in addition to his Instagram account which has over 465k followers.

Rush Holland was born as Rush Holland Butler on September 4, 2004, in Malibu, California, United States. As of 2020, his age is 15. He has not revealed anything about his parents. He has a sister named Brooke who is a popular singer and social media personality. In 2018, the two siblings did a “Sibling Showdown” video at the Famous Birthdays office.

In his childhood days, he loved playing several sports including football, basketball, and lacrosse, and golf. However, his hectic schedule reduced his playing time.

Holland goes to school but as of now, he has not revealed which school he is attending.

Rush Holland started gaining fame after posting actively on his Instagram account. He started receiving acting offers at a young age. In 2017, he got his acting breakthrough. He portrayed ‘Flash’ in the web series ‘Chicken Girls’ which starred his sister.

Moreover, he joined his sister in the band, ‘RockYourHair’, and started conducting tours and stage shows with the band. Following that, he also hosted shows and hosted the ‘Back to School’ concert with Casey Simpson and Hailey LeBranc.

On Instagram, his fame kept increasing and has already gained over 465k followers. He started hanging out with some other famous social media stars such as Annie LeBlanc, Logan Paul, HRVY, Carson Lueders, Hayden, and Dylan Summerall.

Moreover, he also posted videos on TikTok and soon caught the attention of many people as he gained almost 40k followers on the platform in a short time.

He has also collaborated with famous social media stars and made appearances in videos for different Youtube channels including Christian Lalalma and Carson Lueders.

Still in his early teenage, Rush already stands at a height of 6 feet 1 inch and weighs around 60 kg. He has blond hair and a pair of blue eyes.

Rush Holland has an estimated net worth of over $300k as of 2020. His primary source of income includes social media and touring with his band. He has not revealed his annual salary as of now.

The young social media sensation has not been involved in any controversies. He has been able to keep himself away from any type of controversy and scandal. So far, he has not done anything controversial in his career. Being this successful at a young age, he also has a lot of haters who try to drag him down with false rumors. But since the rumors have no truth behind them, they are rarely talked about.

You may also like to read the Bio, Career, Net Worth, Body Measurements, and more about Clark Gregg, Stella Gregg, Kimberly Craig, and more.