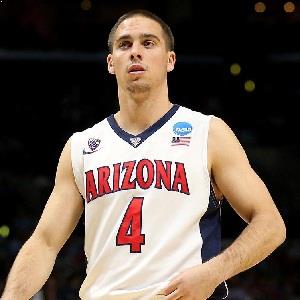 Reflecting on a personal life of T. J. McConnell, he is in a married relationship. He has tied the knot with his longtime girlfriend Valerie Guiliani. They got married in Sep 2017. This couple is living happily and there is no sign of separation.

Who is T.J. McConnell?

Tall and handsome T.J. McConnell is an American well-known professional basketball player.  He is best known as the player for Philadelphia 76ers of National Basketball Association (NBA). He plays from point guard position wearing a jersey number 1.

American professional basketball player T. J. McConnell was born in Pittsburgh, Pennsylvania. He was born on 25 March 1992. He is of North American ethnicity and has an American nationality.

His birth name is Timothy John McConnell Jr. Her mother’s name is Shelly and father’s name is Tim. He has a brother named Matty McConnell. He was born in an athletic family where his father Tim as well as his aunt Suzie McConnell-Serio, both used to be basketball players.

McConnell studied at Chartiers Valley High School and led his team to the WPIAL Championship. He attended Duquesne where he was honored 2011 Atlantic 10 Freshman of the Year. Later in April 2012, he was transferred to the University of Arizona hoping to get a chance to compete for a national championship.

On 27 September 2015, he signed with the Philadelphia 76ers and made a debut against a match with Boston Celtics recording 4 points, 4 assists, and 3 steals. He rejoined the 76ers in the 2016 NBA Summer League in July 2016. He set a career high of 17 assists in a match against Boston Celtics on 6 January 2017 and hasn’t been traded to any other teams in the NBA.

T.J. McConnell is playing for 76ers since the beginning of his career journey. He plays from point guard position for the Philadelphia 76erswearing.

Unlike other players, he hasn’t been in rumors and he was criticized for being a better option as starting point guard for the 76ers.

T.J. McConnell has a height of 6 feet 2 inches. His body weighs 86kg. He has dark brown hair and blue eyes.