Tracy Letts is an American playwright, screenwriter, and actor.

Tracy Letts is a married man. He married American actress Carrie Coon in September 2013. The pair does not have children from this marriage. Furthermore, the marriage is going strong as there is no news regarding any extramarital affairs. 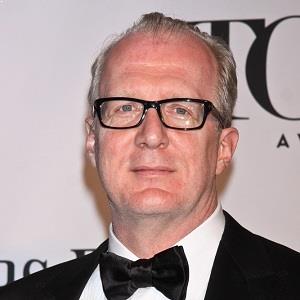 [re August: Osage County (2013)]I know that there's another dimension in the film that is not in the play, and that's Osage County. I would take them [filmmakers] to my home and show them the landscape, that's kind of profound for me as a guy who not only has written a play, but written a play that's somewhat autobiographical. The landscape itself becomes a character.

It was my decision to follow Barbara [daughter played by Julia Roberts] outside of the house at the end of the film, which is different from how the play ends...I want to correct that. The play ends with Violet alone in the house, and her daughters have left. That's how the movie ends, too. We made a decision that we're going to see more of what happens a little later. In my original screenplay, I think the way I had written Barbara in the car, it was a little darker, a little more obscure. [Director John Wells] made the choice not to film in that way. Staging is the director's prerogative in the film. It doesn't look exactly how I wrote it on the page, but I wrote it with Barbara leaving the house. There's a point where you throw your hands up and say: It's John's movie. You are not the ultimate authority in this construct.

Who is Tracy Letts?

Tracy Letts is an American playwright, screenwriter, and actor. He received the 2008 Pulitzer Prize for Drama for his play ‘August: Osage County. Additionally, he wrote the screenplays of three films adapted from his own plays: ‘Bug’ and ‘Killer Joe’.

Letts was born in Tulsa, Oklahoma on July 4, 1965, to parents   Billie Letts and Dennis Letts. He is 56 years old. Additionally, he has two brothers, Shawn, a musician, and Dana. Throughout his childhood years, he was raised in Durant, Oklahoma. He is of American nationality. Furthermore, he belongs to a mixed ethnic background of English, Irish, and Scottish.

Talking about his education, Letts graduated from Durant High School in the early 1980s.

Letts initially moved to Dallas, where he waited tables and worked in telemarketing while starting out as an actor. Next, he appeared in Jerry Flemmons’ ‘O Dammit!’. Later, he moved to Chicago at the age of 20 and worked for the next 11 years at Steppenwolf Theatre Company and Famous Door. Additionally, Letts was a founding member of Bang Bang Spontaneous Theatre.

Letts has over 25 credits as an actor. Some of the movies and television series that she has appeared in are ‘Divorce’, ‘The Post’, ‘Lady Bird’, ‘Comrade Detective’, ‘The Lovers’, ‘Imperium’, ‘Elvis & Nixon’, ‘Indignation’, ‘Wiener-Dog’ and ‘The Big Short’ among others.

Additionally, he has written the screenplays for three feature films based on plays of the same names written by Letts: Bug (directed by William Friedkin), Killer Joe (also directed by Friedkin); and August: Osage County (directed by John Wells). In addition, he is also an author and has written books like ‘Mary Page Marlowe (TCG Edition)’, ‘Linda Vista’, ‘Bug: A Play’, ‘The Minutes (Tcg Edition)’.

Letts has not revealed his current salary. However, he has an estimated net worth of around $4 million as of 2022.

There was a rumor that suggested that Coon might be pregnant with the pair’s first child. This later turned out to be true. He has not been part of any notable controversies at present.

Talking about his body measurement, there is no information regarding Letts’ height and weight. His hair color is grey and his eye color is blue.

Congratulation To The Couple!! ‘Fargo’ Actress Carrie Coon Is Pregnant With Her First Baby Together With Her Husband Tracy Letts