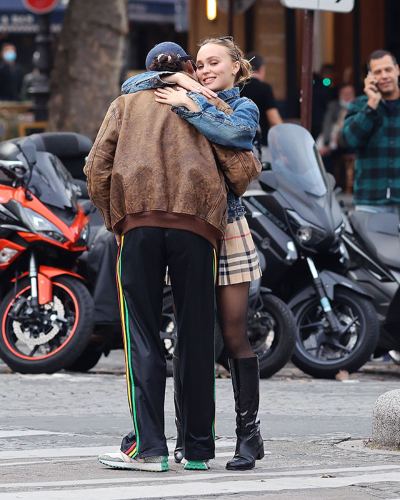 Lily-Rose Depp and Yassine Stein are now a thing! The French rapper had a PDA filled outing while shopping for groceries in Los Angeles.

Earlier in October, they were pictured out on a lunch date in Paris last month during the couple’s PDA filled outing. During their grocery shopping, they shared a kiss while grabbing coffee and matcha.

Likewise, Lily-Rose showed off her toned legs in a bright blue wrap skirt matched with an ice blue knit sweater which had diamond patches and a drawstring hem over a white tank top. Yassine wore charcoal gray cargo shorts with a white sweatshirt, a navy blue baseball cap, and black and red sneakers.

They walked arms around each other towards the supermarket. Previously, Lily-Rose dated Timothee Chalamet.

Who is Yassine Stein?

Yassine Stein is a rapper from Casablanca Morocco. He made his music debut with rapper Lomepal and in French hip hop with HAYAT. They released it on 5th May 2020. Likewise, he is also a French director and a member of L’Odre Collectif. He has an Instagram account with 27.2k followers.

How much is the net worth of Lily-Rose Depp?

Lily-Rose Depp has an estimated net worth of $1 million. She has worked in films like Tusk, Yoga Hosers, The Dancer, Planetarium, A Faithful Man, The King, Crisis, Voyagers, Silent Night, and more. He has appeared in the documentary Period End of Sentence. Her songs are I’m the Man, Babe, and O Canada.

Lily-Rose Depp is a French-American actress and a model. She is extremely prominent for her role in the film titled The Dancer (2016) as Isadora Duncan. She has made a recognizable position in the French acting field at a young age. Read more bio…

Is Ariana Madix ready to have children – freezing her eggs?
Tags : Actress Model