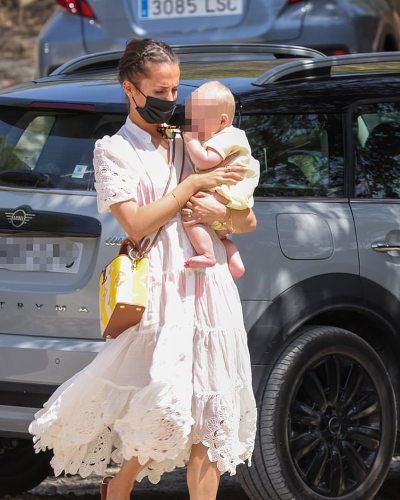 Alicia Vikander and Michael Fassbender are quite a secret-keeper. The couple successfully managed to keep the baby news to themselves for long. They revealed recently that they welcomed their first child earlier in 2021. Likewise, the confirmation came after Alicia was spotted pushing a baby stroller in Paris in August.

Again Alicia and Michael were spotted with their baby as they were on the way for the sunny getaway to Ibiza. Vikander seemed all ready for the top as she wore a flowing white shirt dress with cut-out detail. She was holding their infant baby. Michael was busy loading the luggage after they jetted abroad for their vacation.

“I now have a whole new understanding of life in general. That’s pretty beautiful, and obviously will give a lot to any of my work in the future.”

She opened up that having a baby has changed her life. She is keeping the details about the baby private and focused on enjoying the moments. Vikander added,

“No, I think I’ll wait with that one. I’m enjoying finding it out in the moment right now, more than anything.”

Also read Jennifer Lawrence and Cooke Maroney are going to be parents – expecting their first child together!

Alicia Vikander and Michael Fassbender keep their love life as private as possible. They secretly married on 14th October 2017 at the luxurious La Granja farmstead resort surrounded by family and friends.

Also, they met each other in 2014 while filming The Light Between Oceans. Similarly, Alicia found Michael one of the best actors with whom she worked.

They went to Italy for their romantic honeymoon and were spotted touring Verona and Florence. Likewise, the beautiful couple will celebrate their 4th wedding anniversary in October 2021.

Alicia Vikander is a Swedish actress and former dancer. Also, she won an Academy Award for Best Supporting Actress for her role as Gerda Wegener in the 2015 film The Danish Girl. She also starred in the Danish film A Royal Affair and the science fiction thriller Ex Machina. Likewise, Vikander worked as Lara Croft in the 2018 film Tomb Raider. Read more bio…