Camille Rowe is a model and actress who acted in ‘Rock'n Roll’, ‘The Ideal’ and ‘Our Day Will Come’. 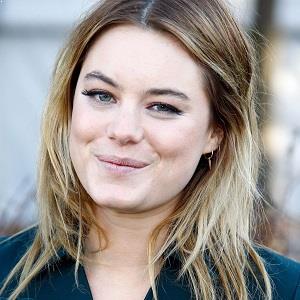 In terms of diet, my parents had a restaurant business so I don't eat any junk food - they taught me to appreciate good food

Stripes are very French - who doesn't love a good stripe

In the morning I drink a big glass of water with lemon, a pinch of baking soda and maple syrup.

What is the relationship of Camille Rowe?

Camille Rowe dated American Singer Andrew Van Wyngarden from 2012 to 2014. Additionally, from 2015 to 2016, she was in a relationship with Cam Avery.

Furthermore, she has also been spotted on the arm of bearded Devendra Banhart, 36, a Venezuelan-American folk singer.

She came to the news after she was spotted enjoying a low-key outing to a Los Angeles restaurant with famous singer Harry Styles. They are in the early stages of dating (2017-2018).

As of now, she is assumed to be single.

Who is Camille Rowe?

Camille Rowe is a French-American model and actress. She has appeared in numerous movies and television series including ‘Rock’n Roll’, ‘The Ideal’ and ‘Our Day Will Come’ among others.

Throughout her childhood years, she spent time between Ville d’Avray, Brooklyn, and California. She is of French-American nationality. Furthermore, she belongs to a mixed ethnic background of English, Irish, and French.

Talking about her education, Rowe was discovered in the French capital when she was just 18 while studying at university.

Additionally, she has been featured in magazines including on the cover of Vogue Paris, Elle, L’Officiel, CRASH, Marie Claire, and Madame Figaro. In addition, she went on to make her Victoria’s Secret debut in 2016.

Apart from her modeling career, Rowe appeared in the French film ‘Our Day Will Come’ alongside Vincent Cassel in 2010. In addition, she appeared in the promo video for The Strokes’ song ‘Call Me Back’ in 2011.

She starred in MGMT’s music video for Alien Days and she also made a small cameo appearance in Supreme’s full-length skateboarding video ‘cherry’ in 2014. She was named the Playboy Playmate of the Month for April 2016.

Rowe has not revealed her current salary. However, she has an estimated net worth of $ 6 million.

Talking about her body measurement, Rowe has a height of 5 feet 7½ inches or 171 cm. Additionally, she weighs 57 kg or 126 pounds.

Rowe is quite active on social media. She has a huge number of followers on social networking sites such as Facebook, Twitter as well as Instagram.

Also get to know more about the birth facts, education, career, net worth, rumors, height, and social media of different personalities like Sandrine Holt, Alexandria Everett, and Candace Moon.

Harry Styles: his relations with ‘One Direction’ band members, career updates, and wrist surgery due to probable tenosynovitis!