Jason Earles is a married person. He has been married to Katie Drysen since August 12, 2017. The duo began dating in January 2013 and announced their engagement on November 14, 2016, through her Instagram account.

The marriage event took place at The Garland in a Toluca Lake, California, and shared the exciting news on Instagram.

Previously, he married his longtime girlfriend, Jennifer Earles on January 4, 2002. The couple met the first time during their high school days and began dating. The couple welcomed a daughter, Noah Earles however, they ended their relationship with divorce on May 17, 2013. 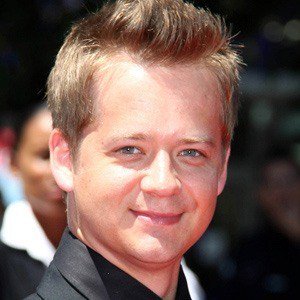 I don't understand leggings. They were the worst trend of the '80s.

I actually cried during 'Titanic'. It was one of the few movies I've seen in the theater multiple times.

I talk to my parents more than anybody in my family.

Who is Jason Earles?

Jason Earles is an American actor, comedian, martial artist, and director who is best known for his role as Jackson Stewart in Disney Channel sitcom, ‘Hannah Montana’ and also for his role as Rudy Gillespie in the Disney XD series ‘Kicking It’.

He was born on April 26, 1977, in San Diego, California, USA. Jason’s birth name is Jason Daniel Earles and he is currently 43 years old. Jason’s mother’s name is Jenny Earles but his father’s name is unknown. His family shifted to Ohio and then to Washington State and again moved to Oregon. He is the middle of the five children.

Jason is a trained equestrian rider and is a fan of Elvis Presley. He loves snowboarding and has two pet cats, Timmy and Presley. His favorite sport is Baseball and likes to play video games in his spare time.

He looks much younger than his actual age.

Jason holds American citizenship but his ethnicity is unknown.

Jason Earles played Feste and Sebastian in the productions of ‘Twelfth Night’ and ‘The Tempest’ respectively during his tour with the prestigious ‘Montana Shakespeare in Parks’. After that, he came to an agreement to the former theatre director, Gerry Roe, not to cut his nude scene in ‘Equus’ and appeared in the series.

In addition, he appeared in ‘The Sheild’, ‘Breakpoint’, and in ‘Malcom in the Middle’ in 2003. He debuted his film career from the film ‘National Treasure’ as Thomas Gates in 2004.

He was nominated for Teen Choice Award in the category Choice Movie Actor: Music/Dance for ‘Hannah Montana: The Movie’ in 2009.

In his CV, he stated that he was born on April 26, 1985, but later revealed that his date of birth is 1977 and there are speculations that Jason’s youthful appearance is because of a rare genetic hormonal condition called ‘Kallmann Syndrome’.

Jason Earles has a slim body with a height of 5 ft. 7 inches and he weighs 63 kg. Jason has blue eyes and light brown hair.