Gained a lot of media attention for Miss Teen Houston in 2010.

Talking about her personal life, she is in a relationship. Her boyfriend’s name is Dejounte Murray. Her boyfriend is an NBA basketball player and plays for the San Antonio Spurs. However, the couple is very much in love.

She keeps taking the snaps and videos with her boyfriend and uploading them on her social media handle. 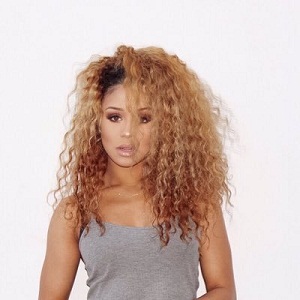 Who is Jilly Anais?

Jilly Anais is an American singer, model, and actress. She gained a lot of media attention for Miss Teen Houston in 2010. Moreover, she is popular for her single song The Juicy released in 2016.

She was born on January 2, 1996, in Houston, Texas, and grew up in the same place. Her nationality is American and his ethnicity is Jamaican.

Her birth name is Jillyan Anais Moor. However, not much is there regarding her earlier days and childhood. She has a younger brother named Jules.

Much of the attention and fame she earned over the years is entirely focused on her work and talent. Despite that, it will not be wrong to say that she had a decent upbringing which has played a major role in her success.

In the same way, the way she has displayed her talents and aptitudes, there is no denying that she had amazing education facilities to nurture, develop, and guide her talents in the right direction.

It sure did help her to achieve what she always wanted to and dreamed of.

However, her education and qualifications in detail are still to be disclosed in the coming days.

Jilly initiated her career as a model by joining Page Parkes Modeling & Acting Agency in 2009. During her time in the agency, she appeared in several commercial roles for Academy, Sports Authority, Sakowitz Furs, Dance Spirits, and Dance Academy.

In 2010, she turned her attention toward pageants and beauty competitions. Eventually, she won Miss Teen Houston for 2010-2011. Later on, she moved to LA in 2010 to pursue a career in acting.

She attended various acting schools to enhance her skills and abilities. As a result, she was able to feature on the video cover for Demi Lovato’s Cool For The Summer.

Similarly, she appeared in Real Husbands of Hollywood produced by Kevin Hart.

Recently, she is displaying acting skills via social media and garnered a lot of attention for her beauty and talents. She later released her first single called “The Juice” which was produced by the LA Production duo The Invaders.

Jilly Anais: Salary and Net Worth

She has generated a lot of income from displaying her charismatic talents which surely has skyrocketed her net worth.

However, her net worth is still not confirmed and exact to be told, as various sources have their say regarding it.

During her entire career, she has always maintained top-notch professionalism in her work. Her work is always admirable and her hard work reflects how well she is doing in her career.

Instead of attracting unwanted attention, she has worked day and night to achieve her dream and make every belief that she has no interest in becoming a controversial figure.

Jilly has a height of 5 feet 6 inches. Her body weighs 55kg. She has light brown hair and green eyes. Furthermore, her body measurements are 32-24-34 inches. Besides these, her shoe size is 9 US and the dress size is 2 US.

Also get to know more about the birth facts, education, career, net worth, rumors, height, and social media of different personalities like Jennie Kim (Singer), Nazanin Mandi, and Amanda Seyfried.