Kelly McCreary is an American well-known actress and producer. 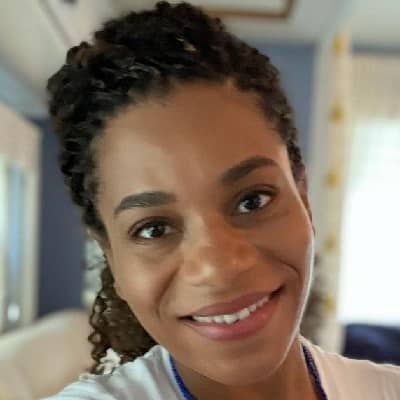 Kelly McCreary is currently living a blissful conjugal life. She is married to director Pete Chatmon. The couple started dating in the year 2017. They met for the first time on the set of Grey’s Anatomy.

In 2019, the couple engaged and kept the proposal a secret for a while. On May 7, 2019, the duo tied the knot with the seaside destination wedding. Presently, they reside in Los Angeles, California.

In August 2021, Kelly announced that she is pregnant with her first baby.

Who is Kelly McCreary?

Kelly McCreary is an American well-known actress and producer. She is widely recognized after appearing on the ABC drama series Grey’s Anatomy as Dr. Maggie Pierce. The actress is also known for her series regular role as Tyra Dupre on The CW’s Emily Owens, M.D.

Kelly was born on the 10th of July, 1981, as Kelly J. McCreary. Her birthplace is in Milwaukee, Wisconsin, United States.

The name of her parents is Geoffrey McCreary (father) and Mary McCreary (mother). She has two sisters named Crystal McCreary and one of her sister’s names is unknown. Crystal is also an actress by profession.

From an early age, McCreary is interested in acting and theatre. She attended public middle and high schools that emphasize arts education. At the age of 17, she moved to New York City and joined an affiliate of Columbia University at Barnard College, and graduated in the year 2003.

Further, she also studies a semester at the British American Drama Academy in London. She trained at the Chautauqua Conservatory Theatre Company and The Actor’s Center.

Kelly played for several productions such as Minor Latham Playhouse and worked on Columbia’s Varsity show during her college year. After graduation, she worked part-time at Barnard’s alumnae affairs office gave auditions and performed in plays. In the mid, she quit acting and moved to Spain due to a lack of success in acting and started worked on a farm.

However, she later returned and started performing in Dominique Morisseau’s play Follow Me to Nellie’s. Ultimately, she made her screen debut on the PBS animated series Cyberchase in 2005 as Kelly. She guest-starred on another animated PBS series, The Electric Company. In 2011, she made her big-screen debut through Paul Weitz’s film “Being Flynn” alongside Robert De Niro, Julianne Moore, and Paul Dano. Her other films credit include How to Follow Strangers (2013), Baby, Baby, Baby (2015), and Life (2015). Similarly, she starred in television series like White Colar (2009-2011), The Onion News Network (2010), Rubicon (2010), Castle (2014), Station 19, and more.

Besides, she co-founded the Jaradoa Theater Company, an organization committed to community outreach in New York. She is an associate member of IAMA Theater in Los Angeles.

In 2018, Kelly participated and served as an ambassador in former First Lady Michelle Obama’s When We All Vote campaign. The campaign was organized to increase voter turnout in the United States by encouraging citizens to register to vote.

As of 2021, Kelly has an estimated net worth of around $9 million. However, her salary, real estate, and other income are still under review.

The actress has an impressive height of 5 feet 4 inches and her weight is about 58 kg. She has curly neck-length black hair and dark brown pair of eyes.