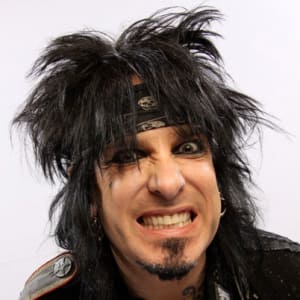 I woke up the next morning... the needle... was still in my arm.

I hate things that are diluted - I mean, you don't mix Jack Daniel's with Coke. That's a sin!

Selling my soul would be a lot easier if I could just find it.

When You've lost it all....thats when you realize that Life is Beautiful.

Friends tell each other what nobody else is willing to tell you.

Nikki Sixx has been with many girls in the past including Lita Ford in the 1980s whom he dated for six years. Later he dated a Canadian singer Vanity for shorter and even included his ups and downs with her in his autobiography.
In 1989 he first married to a Playboy Playmate Brandi Brandt from whom he has three children Gunner Nicholas Six, Decker Nilsson Sixx, and Storm Brieann Sixx. This marriage lasted only for 7 years and soon after separation, he married another playboy playmate Donna D’Erico. From her, he has a daughter Frankie-Jean Sixx.
After few separation and reconciliation with Donna, he finally divorced with her in 2007. Later he was seen with a famous tattoo artist, Kat Von D from 2008 to 2010.
After that, he started dating Courtney Bingham and finally tied the knot with her on March 15, 2014. Since then he has been happily living with her.

Who is Nikki Sixx?

Nikki Sixx is an American famous bassist who has founded the heavy metal band, Motley Crue. Furthermore, he is a songwriter, radio host and has written multiple biographies including New York Times’s Best Seller ‘The Dirt’.

Nikki Sixx was born in San Jose, California on December 11, 1958. She is 62 years old. When his father, Frank Ferranno left home, then his mother, Deana Richards, and grandparents raised him. Unfortunately, his mother also abandoned him later. He is of Italian ancestry and holds American citizenship.

Talking about his education, he has attended six schools within 11 years when roaming around here and there for a living.

Sixx started learning bass guitar after being expelled from the school because he was found selling drugs. After that, he joined the band called Sister led by Back Lawless. But in 1978 he along with bandmate Lizzie Grey was fired from the Sister. Later, they together formed a new band called London and recorded a number of demos. Soon, he left the band. Finally, he along with drummer Tommy Lee founded Motley Crue which was later joined by guitarist Mick Mars and singer Vince Neil.

Besides music he along with the bandmates and writer Neil Strauss penned the autobiography The Dirt: Confessions of the World’s Most Notorious Rock Band holds the top spot on The New York Times bestseller list for 10 weeks. Furthermore, he is the host of the rock music program  ‘Sixx Sense with Nikki Sixx’ on various radio stations in Dallas, Texas.

Nikki Sixx: Salary and Net Worth

Of all his very successful career, Sixx has an estimated net worth of $45 million.

Back on December 23, 1987, he was declared dead for two minutes after a heroin overdose. Later, he was taken to the hospital and revived by paramedics. After the revival, he was sent into rehab.

Sixx is 6 feet and 1 inch tall and weighs around 86 kg. He has blue eyes and black color hair. Furthermore, he fits in 12 US size shoes.