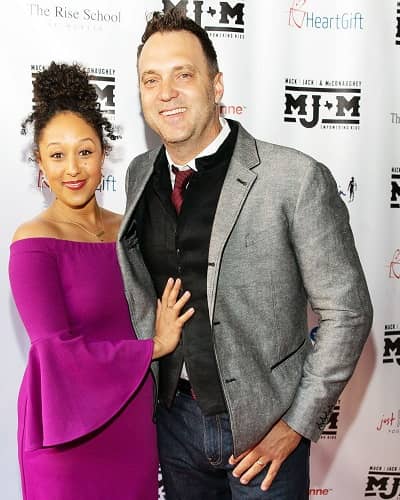 Tamera Mowry and Tia Mowry gained fame from the ABC/WB sitcom Sister, Sister. The inseparable twin sisters Tamera and Tia have not met each other for six months.

The sisters are separated due to the coronavirus pandemic. In a recent interview with Entertainment Tonight Tamera revealed that she has not met her sister for six months.

“I still haven’t seen. her, physically. I live in Napa, and right when we were actually going to head up there, there was a surge (in coronavirus cases) in L.A. and it wasn’t wise for all of us to go there. Recently we were going to meet up — (Tia’s) working on ‘Family Reunion’ — and the time, it didn’t work. But I know for a fact when we see each other we’re just, we’re gonna cry.”

But the sister’s video calls each other and have a happy time virtually. They have a glass of wine and talk about what’s happening in their life. Tamera can’t wait to meet her sister.

The sisters have been sharing their love for each other on social media. They wished each other on their 42nd birthday on 6th July 2020.

Who is Tamera Mowry’s husband

Tamera Mowry and Adam Housley walked down the aisle on 15th May 2011. Their wedding was held in rustic Napa Valley. Adam popped the question during a trip to Venice in January 2011.

They got married at the Villagio Inn amp Spa in the groom’s native Napa Valley with 300 guests in attendance. Her twin sister Tia was the matron of honor and she was expecting her first child at the time.

Tamera wore a gorgeous Carolina Herrera gown and posed with the flower girl and nine blush-clad bridesmaids. She wore a canary-and-white diamond necklace and diamond earrings by Erica Courtney. Similarly, the ring bearer walked their dog Shih Tzu who was dressed in a little tuxedo.

“We wanted a huge celebration where we could have a lot of fun!”

How much are the sisters Tia and Tamera Mowry’s net worth?

Tamera Mowry has an estimated net worth of $4 million. She is an American actress and television personality. She has appeared in films like The Hot Chick and Redemption of a Dog.

Similarly, her sister Tia Mowry has a net worth of $4 million. Tia has worked in The Hot Chick, Baggage Claim, Indivisible, A Black Lady Sketch Show, Family Reunion, Prince of Peoria, A Gingerbread Romance, and more.

Tamera Mowry-Housley has a house in Napa Valley. Her house consists of a family kitchen, an impressive pool terrace (with an outdoor pizza oven!), and of course, a 400-bottle wine cellar.

Tamera Mowry is an American actress, model, and host. She is well-known for her work in ‘Sister’, ‘Twitches’, ‘Tia and Tamera’, ‘The Real’, and more. Read more bio…

Tia Mowry is an actress. Her full name is Tia Dashon Mowry. She is famous for her teen role as Tia Landry in the sitcom Sister, Sister.

She had even appeared as medical student Melanie Barnett in the comedy-drama series The Game and the television movie Twitches and its sequel Twitches Too. Mowry has voiced Sasha in Bratz. Read more bio…