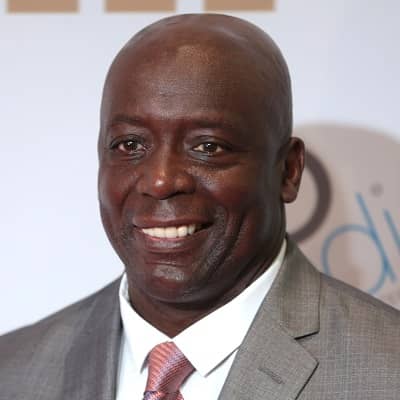 Blanks is married to Tomoko Sato.

Blank and Sato met in 2007 when she worked as his Japanese interpreter. Their marriage was formally registered in January 2009.

Likewise, their wedding ceremony was held on June 20, 2009. He relocated to Japan in 2009. He has also adopted Sato’s two daughters, Marriott Blanks and Erika Peterson Blanks.

Before their marriage, the couple has a daughter Angelika born in November 2008.

Blank was previously married to Gayle H. Godfrey. They met for the first time in the karate class in 1974. They have a son, Billy Blanks, Jr., who works as a dancer, singer, and fitness instructor now.

Shortly after the marriage, the couple also adopted Gayle’s daughter, Shellie Blanks Cimarosti. She was born in 1973.

Living together for over 33 yrs, the duo divorced in 2008. Godfrey filed for divorce, citing irreconcilable differences.

Who is Billy Blanks?

Billy Blanks is an American martial artist, fitness guru, and actor. He is also well known as the creator of the Tae Bo exercise program.

The martial artist was born on September 1, 1955, in Erie, Pennsylvania, U.S. He is of African- American descent.

His father’s name is Isaac Blanks. Likely, his mother’s name is Mabeline Blanks. Blanks is the fourth of fifteen children. Only two of his siblings Michael Blanks (brother), Irene Blanks (sister) are known. Other names are yet to be revealed.

While Blanks birth, he has an anomaly in his hip joints that impaired his movement. It results in clumsiness and he also received various taunts from his siblings. It led his instructors to believe that he would never accomplish much.

Although Blanks get to know the answer to these challenges from the karate. Seeing Bruce Lee performing on TV, he decided he wanted to be a world martial-arts champion.

Blanks started the study of martial arts when he was just eleven yrs old. He has attended various Karate and Taekwondo classes.

Blank was a bodyguard for lead actress Catherine Bach. And during the shoot of 1988’s Driving Force, Blanks impressed the producers with his skills. No sooner he landed with various roles in several martial arts films, including King of the Kickboxers and Bloodfist.

Blanks also appeared in the opening scene of Tony Scott’s The Last Boy Scout and then portrayed Ashley Judd’s kickboxing instructor in Kiss the Girls (1997). Likewise, he has appeared in various other movies and TV programs.

He is now the CEO, coach, and leader of TAE BO® NATION. He developed the Tae Bo workout in the late 1980s. Blanks was running a karate studio in Quincy, Massachusetts, and used components of his martial arts and boxing training. He named it Tae Bo which is a portmanteau of “tae” as in taekwondo and “bo” as in boxing.

Moreover, Blanks opened a fitness center in Los Angeles and started teaching his workouts.  It was able to attract celebrities like Paula Abdul which aids the fame of workout. No sooner, it becomes a pop culture phenomenon after Blanks began releasing mass-marketed videos. In the first year, over 1.5 million VHS tapes were sold.

In 1984 he was The Massachusetts Golden Gloves Boxing Champion and the Tri-State Golden Gloves Champion of Champions. Furthermore, he was the captain of the United States Karate Team and has also won over 30 gold medals in international competitions.

Owing own fitness center and own exercise program, he must have a good earning through it. His VHS tapes were able to earn over 1.5 million in the first year. It has grossed between $80 million and $130 million in sales up to now.

Blanks accused Lancaster of purposely delaying the Labor Commissioner petition in order to inflate legal fees and missing the filing deadline. There was a legal dispute between Billy Blanks and his former business manager in 2009.

Moreover, two women: Rhenee Sharmell Foster, 46, and Demetria Foster Gutierrez, 52 were sentenced to prison for stealing $1 Million from Blanks. They also pleaded guilty to such unauthorized withdrawals from the bank account of Blanks’ company, BG Star Productions, more than 60 times.

Likewise, they were ordered to pay $1,119,000 in restitution and were also barred from being employed by the organizations.

Blank stands with a height of 6 feet and weighs around 70 kg. And he has black colored hair and eyes. He usually has a bald head.

Similarly, he owns a YouTube channel entitled Billy Blanks Tae Bo® Fitness. It was created on Jan 3, 2014, and has over 439K subscribers as of now.

You may also read the bio of Mike Perry, Chuck Zit, Zhenwei Wang, and Fallon Fox.