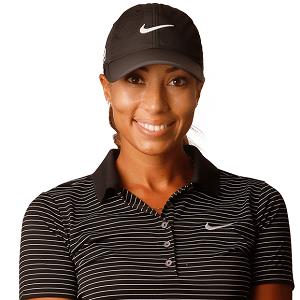 Looks like we have some things to work on!! Not my best performance down under, but always love starting my year at @vicopengolf and @womensausopen. The courses these two weeks were PURE. Thank you for another year of great events.

My curls and I have been through quite the journey. Still a work in progress, but tonight they did well

Just out here working on my game, minding my business.

What is the relationship of Cheyenne Woods?

Cheyenne Woods is currently in a committed relationship. She is engaged to fellow golf player Aaron Hicks.

Aaron is presently serving as Yankees center fielder. Also, the couple together is blessed with a baby boy named Cameron Jaxspn Hicks, who was born on April 26, 2022.

The two got engaged back in October 2021.

Who is Cheyenne Woods?

Cheyenne Woods is an American professional golfer and is known as the niece of golf legend, Tiger Woods. She won more than 30 amateur tournaments before winning tournaments like the 2014 Volvik RACV Ladies Masters as a professional.

Her paternal grandfather Earl Woods was her first coach and grew up watching her uncle, Tiger Woods play under his mentorship.

She attended Xavier College Preparatory and Wake Forest University. She played golf for both the school and college teams.

Cheyenne won the Arizona 5A State Championship two times in 2006 and 2997 while she played from the Xavier College Preparatory. She graduated in 2012 from Wake Forest as an All-American and All-ACC team member in college and immediately went pro.

Cheyenne received a sponsor’s exemption to play in an LPGA tournament, the Wegmans LPGA. She missed the cut by four strokes. she won the Atlantic Coast Conference (ACC) championship in April 2011.

After qualifying for the 2012 U.S. Women’s Open by finishing as co-medalist at her qualifier she made her professional debut at the 2012 LPGA Championship. She had her first professional win in the SunCoast Ladies Series in late August 2012.

Cheyenne became a member of the Ladies European Tour and finished 78th on the Order of Merit in 2013.   In 2014, she had her second professional win (and first on a major tour) at the Volvik RACV Ladies Masters.

She finished T-11th at the LPGA Final Qualifying Tournament, thereby earning Category 12 membership in December 2014 that entitled her the entry in most full-field events apart from the more prestigious events.  She is the sixth African-American to play on the LPGA Tour.

Salary and net worth

Cheyenne Woods’s golf career has been away from any sorts of controversies to date. She is rumored to be dating Brandon A. Magee since 2013.

Also get to know more about the birth facts, education, career, net worth, rumors, height, and social media of different personalities like Hannah Green (Golfer), Gerina Piller, and Natalie Gulbis.