Janet McTeer is a Tony Award-winning actress. Her relationship status is married. 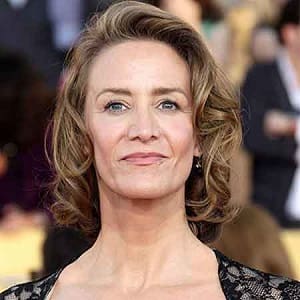 The older you get, the better you get, because you've seen more. You don't necessarily have to go through a lot, but you have to witness it in order to recreate it.

Yes, I was slightly outside everything when I was growing up. My mother jokes that I was exchanged at birth. She brought us up to have traditional values. She was absolutely not part of the '60s generation.

I have become a marketing tool and I feel very uncomfortable with that. There's no space for me to express myself.

It's naive to think there is a woman in the world who isn't brought up to believe that they are waiting for their soul mate. You even see it in Disney.

I have very girly hands and I use them a lot when I talk in a way that I think is very feminine.

Janet McTeer is a married woman. She is married to Joseph Coleman. There are no details available about the pair’s wedding.

Their marriage seems to be going strong as there is no news regarding any extramarital affairs at present.

Who is Janet McTeer?

McTeer was born in Newcastle upon Tyne on August 5, 1961. She was born to parents Jean (née Morris) and Alan McTeer.

Throughout her childhood years, she grew up in York. Janet became interested in the world of acting from an early age. She is of British nationality.

Furthermore, she belongs to the mixed ethnic background of Scottish and English.

Talking about her education, McTeer attended Queen Anne Grammar School for Girls. Additionally, she also trained at the Royal Academy of Dramatic Art.

In 1985, she appeared as Esther Pearson in the TV series ‘Juliet Bravo.’ In addition, she also had roles in ‘Gems’ and ‘Half Moon Street’ in 1986. Since then, she has appeared in several other movies and television series. All in all, she has over 60 credits as an actress.

Some other movies and television series that McTeer has appeared in include ‘Sorry for Your Loss’, ‘Ozark’, ‘Jessica Jones’, ‘The Exception’, ‘Paint It Black’, ‘Me Before You’, ‘Allegiant’, ‘National Theatre Live: Les Liaisons Dangereuses’, ‘Fathers & Daughters’, ‘Battle Creek’, ‘Insurgent’, ‘Angelica’, ‘The Honourable Woman’, ‘The White Queen’, ‘Parade’s End’, ‘Damages’, ‘Hannah Arendt’, ‘The Woman in Black’, ‘Weekends at Bellevue’, ‘Albert Nobbs’, ‘Psychoville’, and ‘Into the Storm’.

Her other screen projects are ‘Masterpiece Classic’, ‘Sense & Sensibility’, ‘Five Days’, ‘The Amazing Mrs. Pritchard’, ‘As You Like It’, ‘Tideland’, ‘The King Is Alive’, ‘Waking the Dead’, ‘The Governor’, ‘Carrington’, ‘Don’t Leave Me This Way’, ‘A Masculine Ending’, ‘Portrait of a Marriage’, ‘The Play on One’, ‘Precious Bane’, ‘Les Girls’, ‘Theatre Night’ among others.

Furthermore, she was appointed an Officer of the Order of the British Empire in the 2008 Queen’s Birthday Honours.

She has also garnered nominations for Primetime Emmy, Awards Circuit Community Award, CFCA Award, and Chlotrudis Award. All in all, she has 9 wins and 31 nominations for various awards.

This actress has not revealed her current salary. However, she has an estimated net worth of around $ 4 million at present.

McTeer has not been part of any notable controversies in her career. Furthermore, at present, there are no rumors concerning her life and career.

Furthermore, her natural hair color is blonde and her eye color is blue.