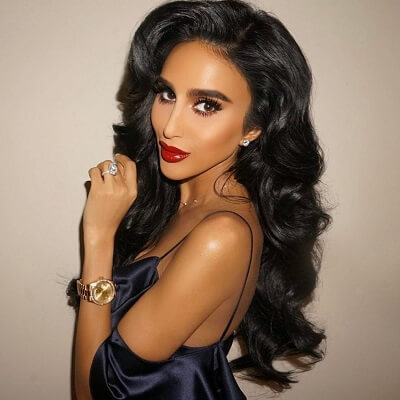 Lilly Ghalichi is a married woman. She is married to her boyfriend turned husband, Dara Mir. Dara is a lawyer. The couple first met at the lobby as the neighbors. They started dating since 2016.

They got engaged after dating for around five months. The couple exchanged wedding vows on 6 May 2017. The ceremony was at the Beverly Hilton hotel and was attended by famous reality stars including Dorothy Wang and Jonny Drubel.

The couple has been through a rough time together. There were rumors about the couple’s divorce which turned out to be true. But, in November 2019, Lilly announced that they would be fighting for their marriage and love and won’t be divorcing each other. The pair called off their divorce and have been very happy with each other ever since.

Lilly Ghalichi is an American reality TV show star famous for her work on Bravo’s ‘Shahs of Sunset’. Moreover, she is also an entrepreneur, author, designer, and blogger.

Her ethnicity is Persian.

Talking about her education, she attended the Red McCombs School of Business at The University of Texas at Austin and graduated with a Bachelor’s Degree in Business. Following that, she earned a law degree from Loyola Law School.

Lilly Ghalichi was interested in fashion from her early life. She decided to pursue a career as a fashion designer. She eventually climbed up to being a successful fashion entrepreneur. Lilly now owns several fashion and beauty brands including Lilly Lashes, Lilly Hair, WantMyLook and GhalichiGlam.

In 2012, she got the opportunity to work as a cast member for the Bravo network TV show, ‘Shahs of Sunset‘. Following that, she achieved more fame and increased her social media followers vastly.

Furthermore, she is also an attorney and author. She has written several articles about her brands and fashion designing techniques. In 2014, she hosted a seminar called How to Live Like a Boss.

Lilly Ghalichi has an estimated net worth of around $2.5 million. There is no information about her salary. A reality TV star gets paid from around $750 a week to a whopping $75,000 per episode. Also, Ghalichi has her own business which also generated a significant amount of income.

There were lots of rumors all over the media suggesting that she was getting a divorce from her husband. She confirmed the rumors as false. However, later the couple was filing for divorce. But, in November 2019, Lilly announced that they would be fighting for their marriage and love once more. The pair called off their divorce.

In March 2017, she posted a video on Instagram of a girl facing acne problems. She posted a before and after video of the girl’s face after make-up. Many people criticized the video saying the girl is beautiful as she is and the make-up would harm her skin.

Moreover, her business partner, Payam Pedram filed a case against her and claimed that she took money from their accounts and deceived him with some secret transactions. He also claimed she was under the influence of drugs at that time and was not fulfilling her responsibilities.

Lilly stands at a height of around 5 feet 6 inches and weighs around 55 kg. Her body measurements for breasts, waist, and hips are 32-24-34. Her shoe size is 8(US) and her bra size is 30B. In addition, her eye color is dark brown and her hair is black in color.

You may also like to read the Age, Bio, Career, Education, Net Worth, Relationships, and more about Jules Wainstein, Kaitlynn Carter, Elena Moussa, and more.