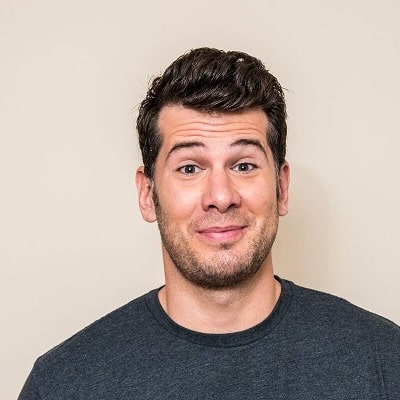 We had a severely autistic kid in my class, and I was always picked last in gym class, even after him. Naturally, that made me feel pretty bad as an eight-year-old

Everybody has an angle. The only time I say no to an interview is when someone says they don't have an angle. I know right away that that's not honest

Liberals don't believe in the ultimate concept of self-reliance, which is why they look to the government for stability.

Steven Crowder is a married person. He is married to Hillary Korzon in August 2012. The pair engaged in March 2012 after dating for a few years and finally exchanged their wedding vows after five months of their engagement in August 2012. The couple has not welcomed any children to date.

Who is Steven Crowder?

Steven Crowder is an American-Canadian political commentator, actor, as well as a comedian and also the host of the popular show, Louder with Crowder.

He was born on 7th July 1987 in Grosse Pointe, Michigan, the United States of America. He was born as Steven Blake Crowder. Steven was born to Francine Crowder (mother) and Darrin S. Crowder (father).  His mother, Francine is a stylist and costume designer in Canadian television. He was raised along with his elder brother, Jordan Crowder in Greenfield Park, Quebec who is an actor and filmmaker.

Steven holds American-Canadian citizenship but his ethnicity is a mix of English and French-Canadian.

He attended the Centennial Regional High School in Greenfield Park and graduated from there. After that, he attended Champlain College in Burlington, Vermont.

Steven started his career appearing as a guest in television programs. He made his first appearance on the Fox News at the age of 21. He worked for the Fox News from 2009 to 2013 but lost his contract in the year 2013 after criticizing Fox in a radio interview.

Also, Steven Crowder is active in politics. He began posting satirical videos on politically conservative media such as Pajamas Media and also at Andrew Breitbart’s Big Hollywood since 2009. Steven became a member of Americans for Prosperity in December 2012. His program Louder with Crowder became one of the daily featured programs on Conservative Review’s new streaming service, CRTV in 2017.

In addition, he worked as a voice actor on children’s television series, ‘Arthur’ where he depicted the role of Alan “The Brain” Powers. He began performing as stand-up comedy at the age of 15 and also acted in several movies including 2009 movie ‘To Save a Life’ as Doug Moore.

It seems Steven has not been awarded and nominated for his work till date.

He has an estimated net worth of around $3 million and he has earned that sum of money from his professional career. Also, he earns around $50k per annum from his career. Also, he has a bull pet dog named Hopper Crowder which is worth from $500 to $700.

Steven came under fire when Vox reporter Carlos Maza compiled a video of remarks Crowder had made against him, highlighting “repeated, overt attacks” on Maza’s “sexual orientation and ethnicity.” Later, Steven apologized for the video.

Steven Crowder has a height of 6 ft. 2 inches and weighs 100 kg. He has dark brown eyes and hair. His shoe size, dress size, etc. are not available.