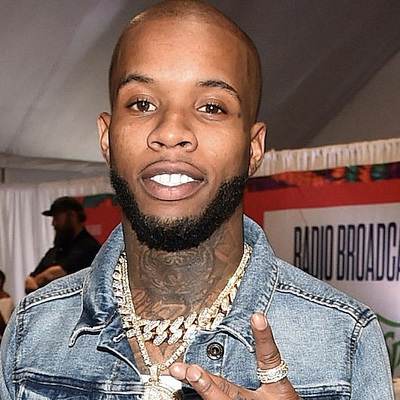 Tory Lanez’s relationship status is possibly single. Till the date, he has not introduced anybody as his lover, wife, or girlfriend.

Also, he has not shared any details on his previous relationship and dating history. However, there were trolls that he is married to the singer, Mya. The news turned out to be a clever strategy for marketing her next music video.

Who is Tory Lanez?

Canadian Tory Lanez is a singer, composer, and record producer. He is renowned as his albums; I Told You, Memories Don’t Die, and Love Me Now?

He is also the founder of the recording label and management company, One Umbrella.

Tory Lanez was born as Daystar Peterson on the 27th of July 1992 in Brampton, Ontario to Sonstar and Luella Peterson. He has Barbados ancestry.

His father is an ordained minister by profession. He lost his mother at the age of 11 to a rare disease that affects four among 1 million people. After that, his mother’s death, he grew up with an absent father.

Due to his father’s profession as a minister, he used to travel a lot. Later, his father got remarried.

Due to his childhood, he started growing behavior issues. In 2006, he moved to his cousin to Dahir Abib, Orane Forrest. After a certain time interval, he returned to Toronto with his grandmother. However, he was forced to leave on his own when his grandmother refused to take care of him.

Talking about his educational background, he dropped off from tenth grade to pursue his career as a rapper.

Initially, Tory Lanez started his singing career as a local performer. At the time, she goes with the name, Argentina Fargo. Moving forward, he launched himself with his debut mixtape, T.L 2 T.O. At the time, he was also active as a music director for the YouTube channels.

Such YouTube videos caught the attention of the Jamaican rapper, Sean Kington. They met during Justin Bieber’s tour. In the tour, he used performed live. Later, in 2011, he signed with Kington’s recording label, Time is Money Entertainment. Under the label, he released the mixtapes including Mr. Peterson, Chixtape, and Swavey.

Later, he resumed his career as an independent artist. Also, he started making his appearance more in musical concerts and tours. In June 2014, he released the singles, Teyana, a tribute to the singer, Teyana Taylor. The following year, released his debut EP, Cruel Intentions with 5 tracks like Acting Like, In For It, and Honda Civic.

On the 15th of July 2015, he released his first single, Say It from his debut album, I Told You under the recording label, Mad Love & Interscope. The singles became the starting milestone in his career as it peaked at the 1st position in the weekly US Rhythmic chart and 21st on the yearly. It also received the 3X Platinum certification too.

The next year, he went to The Level Up Tour. Also, he performed in the Summer Jam and Pemberton Music Festival too. On the 29th of July 2016, he launched his debut album, I Told You that became an instant hit.

Later, on the 26th of October, he dropped his 3rd album, Love Me Now? The Hip pop and R&B album peaked at the 4th position in the US Billboard 200. Last, in March 2020, he made a team with the singers; Reggae, and Buju Banton for the remix; Trust.

As of 2020, he has an estimated net worth of $2 million. As a singer, his earnings are in the range of $210k to $204k. Besides that, he also makes through the royalties of his music too. Apart from that, his musical tours are also a strong source of his income too.

Also, he makes through recording producing and his recording label, One Umbrella too.

Tory Lanez is a black-eyed clean-shaven. He stands at a height of 5 feet 3 inches and weighs around 55 kg.

Also, he prefers to have body tattoos too. Some of his body tattoos include the AK 47 in his chest and music symbols and guitar in his right shoulder.

On the 12th of July 2020, the rapper was arrested in Hollywood Hills in charge of the concealed weapon possession. Also, another rapper, Megan Thee Stallion was present in the car with an injured foot.

In August 2020, she confirmed that she was shot by the Tory through her Instagram live session.

Also, he has a self-titled YouTube channel with over 2.4 million subscribers and more than 1.38 billion views.

You may also read the bio of Flo Milli, Tara Wallace, and Taja Riley.