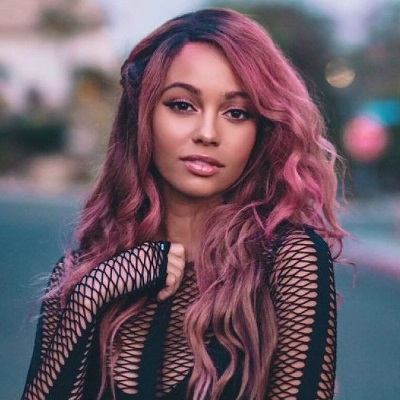 I can’t believe how much growth &

strength you’ve already given me as your mom. It’s like God knew I needed you, my angel. The universe works in mysterious ways but always times everything the way it was meant to be.

Vanessa Morgan is a divorced woman.

Previously, she was married to Michael Kopech. Her husband is a professional baseball player.

In July 2020 she revealed that she is pregnant with and is expecting a baby boy with her husband, Michael. This is her first baby.

The wedding took place on the 4th of January 2020 in a close ceremony among 35 closest friends and family. The ceremony was conducted in the south of Miami following the bohemian rituals.

At the event, the bridge, Vanessa walked down the aisle wearing Fich gown from Israel by Eisen-Stein. She was escorted down to aisle by her father whereas the groom was accompanied by his mother and father.

The couple was engaged six months before the wedding on the 3rd of June 2019 during their camping trip to Havasu Falls, Arizona

However, the couple started having differences, and the couple divorced in June 2020. The reason for their split is unknown.

Who is Vanessa Morgan?

Canadian Vanessa Morgan is a Teen Choice Award-winning actress and singer. She is renowned as Sarah of My Babysitter’s a Vampire.

Currently, she is appearing in the TV series, Riverdale as Toni Topaz.

Her father is of Tanzanian ethnicity whereas his mother is of Scottish ethnicity.

She has an elder sister, Celina Mziray, and a brother, Jeff Morgan. Celina is a reality TV star and model.

In 2010, she graduated from Colonel By Secondary School. Later, she joined Queen’s University to study Philosophy.

She started singing when she was 6. In 1999, she won Junior Miss America pageant. Also, she earned first place at the National Date Festival. Besides that, she also won the African-American Vocal Competition.

Vanessa Morgan started her career as an actress in 2000 with the TV movie, A Diva’s Christmas Carol.

After that, she featured the comedy TV series, The Latest Buzz as Amanda. She first got recognized with the series. Moving forward, she portrayed one of her most famous characters, Sarah Fox in My Babysitter’s a Vampire.

Later, she appeared in numerous TV series like Finding Carter as Bird, The Shannara Chronicles as Lyria, and A.N.T. Farm as Jeanne.

Since, 2017, she is featuring the crime mystery, Riverdale as Toni in a recurring role.

Besides that, she also made her appearance in the music videos like Stand Up!, Be My Joker and Higher Love.

Besides that, she also makes through her appearance in the music videos too.

Talking about net worth, her husband, Michael has an estimated net worth of $1 million.

Vanessa is one of the torchbearers of the movement, BlackLivesMatters. Recently, she made headlines in the media through her Twitter Tweet.

In the Tweet, she stated she is tired of how black people are being portrayed in the media as thugs, dangerous of angry scary people, and used as a sidekick for the white lead character. Later, she also mentioned the pay scale gap between her other co-star and her.

In response Riverdale’s creator, Roberto Aguirre-Sacasa wrote an apology and mentioned that she is right and they will do better to honor her and her character.

Vanessa Morgan has black eyes with black hair. Despite having real black hair, she often prefers to experiment with her hair colors from light brown to light pink.

On Instgram, she is following the personalities like Romee Strijd, Carlos Rohon, and John Boyega.

Vanessa Morgan has advanced pregnancy and confirms that her baby bump is real!