Cruz Beckham is an Instagram star whose father is David Beckham. He is currently single.

Cruz Beckham is presently single and he is not dating anyone at the moment. Moreover, he is immature to involve in any kind of relationship or affairs.

Cruz might be focused on pursuing his career and studies.

On the other side, he has not revealed any of his relationship details to the public till now.

Talking about his parents’ relationship, David Beckham and Victoria Beckham tied the knot on 4 July 1999 and have four children at present and resides in Los Angeles. 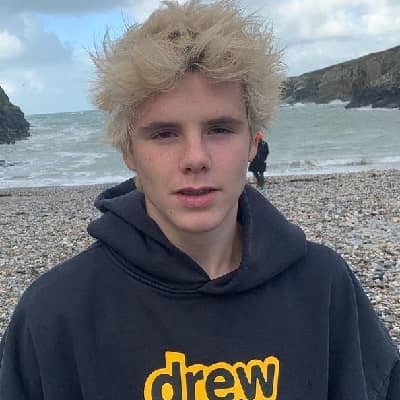 Who is Cruz Beckham?

Cruz Beckham was born on 20 February 2005. At present, his age is 16 years old. Likewise, his birthplace is Madrid, Spain.

Cruz is the son of his father, David Beckham whereas his mother is Victoria Beckham. Moreover, he has three siblings named Brooklyn Beckham, Romeo Beckham, and Harper Beckham.

His dad is a world-famous former English professional footballer and his mom is a renowned English businesswoman, fashion designer, model, actress, and singer. Brooklyn is a well-named British model and photographer.

Talking about his nationality, Beckham holds a British identity whereas his ethnicity is mixed(English, German, Jewish).

Regarding education, the star has not revealed his academic details to the public. Moreover, he might be pursuing his higher education at the renowned university of the town.

Cruz began getting popular as the son of the past English professional footballer, David Beckham. Moreover, he has wide popularity on Instagram as well.

Presently, Beckham is a well-named Instagram star and social media influencer. His social media handles picked up the attention of many fans from his interesting clips and photos.

Cruz often shares his personal photos and family photos on his official Instagram handle. His mother shared a video of him where he was flying at ease from one ramp to another at a local skate park.

Cruz is also famous for his singing and comedy videos on TikTok and Instagram. His dad, Davis shared a clip of him showing many dance moves on Instagram in August 2016.

Furthermore, the star has also performed a breakdance at the Spice Girls’ reunion concert. Many fans and audience begin to praise his singing skills and was stated as, ‘The next Justin Bieber.

Cruz is also famed on YouTube. He started his YouTube journey in 2016 and uploaded his prime video name Cruz Beckham- If every day was Christmas. It was posted on 9 December 2016.

Another video that hit 4.4 million views is If every day was Christmas(Official Video) got released in 2016. Since then, the social media star is not active on YouTube.

Cruz has also followed his father’s footstep as he along with his brothers are very athletic and plays football.

Cruz and his brother, Romeo trained with Arsenal’s youth team. He is still part of Arsenal Academy.

Well, being born in a celebrity family, Beckham lives a lavish lifestyle. He earns a good income from his profession.

On the other hand, his mom, Victoria has an estimated net worth of $450 million. Cruz’s brother, Brooklyn has a net worth of around $1 million.

Additionally, they also owned a Beverly Hills mansion for $18.7 million and sold it in 2018 for $33 million.

In the year 2016, they purchased a converted barn in the rural village of Great Tew in the Cotswolds area worth $8 million.

Cruz has never been part of any controversial matter or rumors till now. The star is surrounded by his private life and family life blissfully.

It seems that Beckham prefers enjoying his personal life and does not want to merge it with his professional life.

He stands at a height of 5 feet 7 inches. Also, he has a balanced body weight of 61 kg.

Furthermore, Beckham has light brown eyes whereas his hair is blonde.

He was chubby and was named a cheeky kid in his family.

Regarding his social media presence, Cruz Beckham is an active personality on social media. He has more than a 1.9million followers on his official Instagram account @cruzbeckham.

He is also active on Twitter with around 22.9k followers. He owns a YouTube channel named Cruz Beckham and it has more than 38.1k subscribers as of now.

Moreover, Beckham is also available on Facebook with nearly 38k fans and supporters. He is also active on TikTok with nearly 282.2k followers on his official account.

Lavish 21st Birthday Bash Of Brooklyn Beckham And Some Of The Pictures From The Party You May Not Want To Miss!