James Marsters is an American actor, musician, and voice actor. He is best known for his role as the British vampire Spike in the series Buffy the Vampire Slayer. 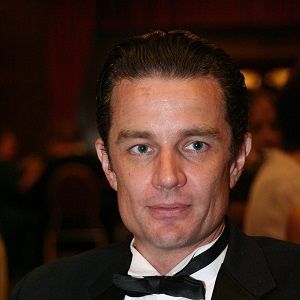 James Marsters is married to Jasmin Rahman. Their wedding was held on January 14, 2011.

He was previously married to Liane Davidson. They two divorced in 1997. Marsters has a son named Sullivan Marsters from his first wife.

Who is James Marsters?

James Marsters is an American actor and musician. James Marsters played the role of Spike in the television series Buffy the Vampire Slayer.

He has also seen in projects like Angel, Smallville, and Torchwood.

Marsters was born in Greenville, California on August 20, 1962. He has a brother named Paul Marsters and a sister Susan Marsters. He grew up in Modesto, California.

His father and mother’s name is unknown. He has a mixed ethnicity ( English, Irish, German, French, and Scottish). His nationality is American.

Marsters joined the Pacific Conservatory of the Performing Arts in Santa Maria, California. Later he attended the Juilliard School in 1982.

He started his first professional acting role in Chicago as Ferdinand in The Tempest in 1987. He has also worked with companies like North light and the Bailiwick.

In 1990, he formed the New Mercury Theatre with Liane Davidson and Greg Musick in Seattle. He played the role of Teachers, Anouilh’s Antigone, and Shaw’s Misalliance in this and other companies.

In 1992 he acted on TV for the first time as a bellboy and church minister on Northern Exposure. Marsters appeared as a guest in the series Andromeda and the film Chance, Winding Roads, and Cool Money. He also played a small role as a TV cameraman in the remake of House on Haunted Hill.

Marsters’ appearance as Spike in the television series Buffy the Vampire Slayer attracted the attention of the public. After the conclusion of the series, he played the role of Spike in the Angel.

Marsters has co-written a comic book named Dark Horse Comics, Buffy the Vampire Slayer: Spike and Dru. He has narrated the series, Summer Knight, in 2006. He did the reading of the series as Proven Guilty, White Night, Small Favor, and Turn Coat.

In 2005, Jolene Blalock and Marsters filmed the thriller Shadow Puppets. He also appeared as Brainiac in the television series Smallville.

In 2007 Marsters co-starred the cinematic release of P.S I Love You. It was released in September 2007. He has also starred in the animated movie Superman: Doomsday. He voiced Lex Luthor.

In 2008, he starred as a guest in the television series Torchwood. He has also portrayed Piccolo Daimao in the Dragon Ball manga and anime. And as Buzz Aldrin in the movie Moonshot on July 20, 2009.

In 2009 he signed for the role in Caprica. He also signed for the High Plains Invaders of Syfy Channel. Marsters has also appeared in the television series Supernatural. He was in season 7 episode 5 “Shut up Dr. Phil” on October 2, 2011.

Marsters is a musician as well. He was the lead singer of the Rock Band Ghost of the Robot. Marsters has sung in a musical episode of Buffy: Walk Through the Fire, Something to Sing About, and Rest in Peace.

James was the winner of the Best TV Actor by SFX Awards, the UK in 2002. He won the Best Comedy Performance that year. He has won the Best Science Fiction or Fantasy Actor in  2003. And Bests TV Actor in 2004.

James Marsters: Salary and Net Worth

This actor has a net worth of $5 Million. His salary and other earning are still unknown.

There is a rumor that an episode of Buffy the Vampire Slayer has been hated by most of the fans. The scene was when Spike tried to rape Buffy.

And this episode has also been the hardest day of the Marsters in his professional career.

To know more about Dominick Brascia,  Noah Baumbach, and Justin Hurwitz, please click on the link.

Lisa Barlow had a little eye accident! Find out why she was rushed to ER! Married life of Lisa and John Barlow