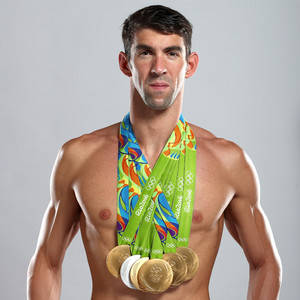 I have my family and friends, so really I'm just another high school kid

If I go to the beach, I don't go in the ocean. I spend enough time in the water.

It's hard to compare myself now to 2008. My goals are different. This is the closure. It's really, how many toppings do I want on my sundae?

Michael Phelps is married after having an on-and-off relationship with his longtime girlfriend!

Phelps has been having an on-and-off relationship with Nicole Johnson for the last 9 years. Nicole is a 2010 Miss California USA and a model.

In February 2015, Phelps popped the question to Nicole. On May 5, 2016, Phelps and Nicole became proud parents to a baby boy they named Boomer Robert Phelps.

The couple was married in a private ceremony on June 13, 2016, in Paradise Valley, Arizona, but their wedding was kept secret until TMZ broke the news in October 2016.

Who is Michael Phelps?

Michael Phelps is an American former competitive swimmer and an Olympian.

At the 2016 Summer Olympics in Rio de Janeiro, he won five gold medals and one silver. This led him to become the most successful athlete in the Games for the fourth Olympics in a row.

Michael Fred Phelps famously known as Michael Phelps was born on June 30, 1985, in Baltimore, Maryland, and raised in the Rodgers Forge neighborhood of nearby Towson.

His father, Michael Fred Phelps, is a retired Maryland State Trooper who played football in high school and college and tried out for the Washington Redskins in the 1970s. Phelps has mixed ethnicity.

He is of English, German, Irish, Scottish, and Welsh descent. His parents divorced in 1994 when he was nine years old, and his father remarried in 2000. He graduated from Towson High School in 2003.

Phelps began swimming at the age of seven, partly because of the influence of his sisters and partly to provide him with an outlet for his energy.

After retirement in 2016, he stated “The only reason I ever got in the water was my mom wanted me to learn how to swim. My sisters and I fell in love with the sport, and we decided to swim”.

When Phelps was in the sixth grade, he was found to be suffering from attention deficit hyperactivity disorder (ADHD).

By the age of 10, he already had a national record for his age group (in the 100-meter butterfly) and began to train at the North Baltimore Aquatic Club under coach Bob Bowman.

Michael Phelps’s Career, Salary, and the Net worth

He broke a number of world records and also further down in his career, he improved to the extent of breaking his own records.

In Spring 2001, he became the youngest male swimmer to ever set a world record which he did at the 200-meter butterfly event. He was just 15 years and 9 months at that time.

After his graduation from Towson in 2003, Phelps set five world records. Phelps became a superhero at the 2004 Olympic Games in Athens, Greece, winning 8 medals (including 6  gold), tying with Soviet gymnast Aleksandr Dityatin (1980) for the most medals in a single Olympic Games.

Phelps went to the University of Michigan in Ann Arbor with coach Bowman to study sports marketing and management.

Michael set more records at the 2006 Pan Pacific Championship in Victoria, British Columbia, and the 2007 World Championships in Melbourne.

World records were set in each of these events, except one.

After the London Olympics, Phelps announced he was retiring from his sports career. He, however, competed at the Mesa Grand Prix and also gave an impressive showing at the Pan Pacific Championships in Australia. There he won three golds and two silvers.

Michael participated in the 2016 Rio Olympics and won several medals.

On August 9, 2016, he made history again when he won gold in both the 200-meter butterfly and as the anchor in the 4×200-meter freestyle relay along with Conor Dwyer, Townley Haas, and Ryan Lochte. Michael was also the first swimmer to win four consecutive gold medals in the same event.

His teammate Ryan Lochte told the media that Michael would be back for the 2020 Olympics Games in Tokyo. However, Michael confirmed to reporters that he was retiring.

Michael Phelps is known to have won 28 Olympic medals at five Olympic Games, including 23 Olympic gold medals and 13 individual golds, thus breaking the record of Leonidas of Rhodes, an Olympic runner and one of the greatest athletes of ancient Greece, who won 12 Olympic victory wreaths in his career time.

Phelps made history as the oldest individual gold medalist in Olympic swimming history.

In addition to his successful swimming career, Michael Phelps has also penned two books; Beneath the Surface: My Story (2008) and No Limits: The Will to Succeed (2009).

Phelps is the co-founder of the nonprofit organization Swim with the Stars, which holds camps for swimmers of all ages. Michael Phelps has a Net worth of $85 Million as of 2022.

Phelps had legal problems when he was charged with driving under the influence. He was fined and had to face legal action and probation.

Michael Phelps is rumored to likely return to the 2020 Tokyo Olympics.

This enables him to have an amazing reach with every stroke, pulling him through the water ahead of the competition.

Phelps weighs 88 kg. His hair is brown in color and his eyes are hazel.

Michael has a social media presence.