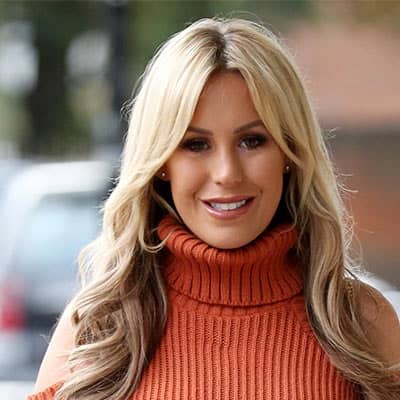 Kate Wright is currently enjoying her married life. She started to date a soccer player Rio Ferdinand in Jan 2017. They met through a mutual friend.

Then in Nov 2018, Rio proposed to Kate in Abu Dhabi, UAE. He gave her a ring worth £400 thousand. On September 27, 2019, this couple exchanged vows in front of 200 guests including their family and friends.

Kate has nine bridesmaids and the wedding was held at Maris Bay hotel, in Turkey. Then recently in late Dec 2020, this couple welcomed their first child, a son together.

Her husband, Rio was previously married to his late wife Rebecca Ellison. They had three children Lorenz, Tate, and Tia.

Her ex-boyfriend is also a TV star and has appeared in the reality-TV series The Only Way Is Essex.

Who is Kate Wright?

Kate Wright is an English TV star and Instagram star. She is popular for being the art of the BAFTA-winning show named The Only Way Is Essex (TOWIE).

Before appearing on TV, she used to work in a bank.

This star’s birth date is 03 June 1991 in Essex, United Kingdom. She is of English ethnic background.

Details about her father are unknown but her mother’s name is Jacqueline. She has a brother, Mike Hassini who was also starred in TOWIE.

Moreover, her academic background is also not disclosed. She left her studies when she was 16 years old.

Kate Wright is a successful TV actress. She is represented by a company named Mokkingbird, UK.

She has appeared in a hit reality show The Only Way Is Essex. This show was first aired in 2010 and Kate appeared in its 16th season.

Currently, she is not surrounded by any rumors. This star is also away from scandals. But her wedding with Rio has created a headline in Sep 2019 as it was star-studded.

This TOWIE star has an estimated net worth of $1 million. Her salary and other incomes are not revealed by the sources.

Her husband, Rio has a net worth of $75 million.

Talking about Kate Wright’s body features, she has brown colored eyes and brown hair. She has dyed her hair in blonde color.

Her height is 5 ft 8 inches and her body mass is 60 kg. But her shoe size and dress size are not available.

Kate is active on social sites. She has around 1.3 million followers on her Instagram. Her post of 16 Dec 2020 is loved by her fans and other viewers also.