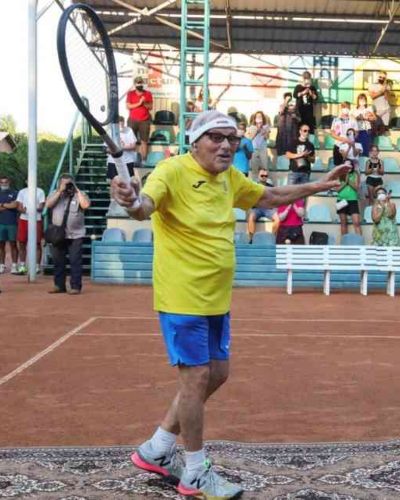 Tennis player Leonid Stanislavski at the age of 97 is actively preparing to participate in the 2021 Super-Seniors World Championship which is going to take place in Mallorca, Spain in October. ITF made a Tweet on 12th October 2020,

“96 NOT OUT In this week that was meant to be the ITF Super-Seniors World Championships, take a look back at the incredible Lenoid Stanislavskyi who competed last year age NINETY FIVE…”

Leonid has surprised the world with his Tennis skills and is recognized as the oldest player in the world.

Also read Tennis Player Naomi Osaka Slammed The Criticism That She Received After Posting Her Bikini Pictures With Her Response!

Leonid Stanislavski was born on 22nd March 1924. He is 97 years old at present. He has lived through World War II and Pandemics such as the Spanish Flu and Covid-19. Even at his age, Leonid is healthy and strong and enjoys the sport. He said,

“Tennis is elegant, a good physical exercise. It is a beautiful game. And there is something else about it, you can play it no matter how old you are. When I was 95 years old, I felt better than now, when you are 97, even walking is difficult,”

Stanislavski has been playing tennis at the amateur level for more than half a century. He participated in the European Championships and World Championships for veteran players. His life goal is to be at least a hundred years old and wants to live up to 110 being active in tennis.