Sienna Miller previously dated Irish actor, Jamie Dornan. Additionally, she was also in a relationship with English actor Orlando Bloom in 2001. From 2003 to 2006 and 2009 to 2011, she dated actor Jude Law. The pair were also engaged for a brief amount of time.

Miller and Tom got engaged in December 2011 and they have a child from this relationship, Marlowe Ottoline Layng Sturridge. She also dated film director Bennett Miller. At present, she is in a relationship with actor Brad Pitt. 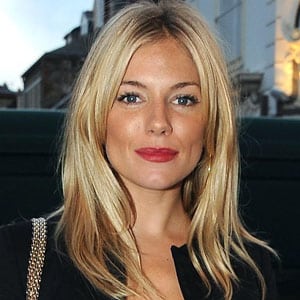 If I never make another film, I don't care as long as I'm true to what I believe in, which is being kind.

It's happiness that makes you glow. Oh, and maybe a touch of fake tan!

I don't wish ill on anyone. I genuinely am one of those people who want other people to succeed. It's not a conscious choice, it's just the way I am.

I went to an all-girls boarding school for most of my youth. We used to do stupid, fun girly things like pull tights over our faces and streak through the lacrosse pitch. And once I snogged the gardener.

Men's traditional view of sexiness isn't sexy. It shouldn't be so obvious: push-up bras and miniskirts? Sexiness, to me, is when people are comfortable with themselves.

Who is Sienna Miller?

Sienna Miller is an English- American actress, fashion designer, and model. People mostly recognize her for her roles in  ‘G.I. Joe: The Rise of Cobra’, and ‘The Girl’ among others.

Miller was born in New York City, New York on December 28, 1981, to parents Josephine and Edwin Miller. Her mother is a South African-born English former model and her father is an American banker turned dealer of Chinese art.

She became interested in the world of acting since her childhood years. She is of British and American nationality. Furthermore, she belongs to English ethnic background. Additionally, she has a sister, Savannah, and two half-brothers, Charles and Stephen.

Talking about her education, Miller attended Heathfield School. In addition, she also studied for a year at the Lee Strasberg Theatre and Film Institute.

Miller initially made her film debut with a role in the 2001 film ‘South Kensington’. Additionally, in 2002, she starred in the TV series, ‘The American Embassy’. Later, she also appeared in the TV series ‘Bedtime’. In addition, in 2003, Miller portrayed the roles of Fiona Bickerton in the TV series ‘Keen Eddie’. Additionally, she also appeared as Tammy in ‘Layer Cake’ and Nikki in ‘Alfie’ in 2004. Since then, she has appeared in numerous other movies and television series. All in all, she has over 35 credits as an actress.

Some other movies and television series that Miller has appeared in are ‘National Theatre Live: Cat on a Hot Tin Roof’, ‘The Catcher Was a Spy’, ‘The Private Life of a Modern Woman’, ‘Live by Night’, ‘The Lost City of Z’, ‘Burnt’, ‘Unfinished Business’, ‘Mississippi Grind’, ‘A Case of You’, ‘The Edge of Love’, ‘The Mysteries of Pittsburgh’, and ‘Casanova’ among others. Additionally, she has also appeared as herself in television series like ‘The Tonight Show Starring Jimmy Fallon’, ‘Made in Hollywood’, ‘The Insider’, ‘The Late Late Show with James Corden’ among others. Furthermore, she has also worked as a photographic model and she signed with Tandy Anderson of Select Model Management. She is also the Global Ambassador for International Medical Corps.

Miller garnered the Golden Globe nomination in 2013 for her performance in ‘The Girl’. Additionally, she has also garnered nominations for BAFTA TV Award and British Independent Film Award. All in all, she has 4 wins and 21 nominations to his names as an actress.

Miller has not revealed her current salary. However, she has an estimated net worth of around $ 18 million at present.

Miller has been rumored to have had a fling with Mark Hildebrandt. Additionally, she became part of a controversy after ‘News of the World’ admitted hacking into her phone. In addition, she was awarded £100,000 in damages later. At present, there are no rumors concerning her career.