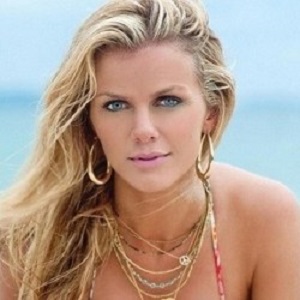 “You become a model once you go through hair, makeup, and Photoshop.” You know what I love the smell of? Christmas trees and pine. I always have a pine candle even if it's not Christmas.

With my first pay cheque I sent my parents to Jamaica, so they actually got passports! They're pretty grounded

it wasn't until they saw the trailer for 'Battleship' that they were like, 'Ooh, this is a big movie, isn't it?'

What is the relationship of Brooklyn Decker?

The couple welcomed a son, Hank in September 2015, and a daughter, Stevie in November 2017.

Who is Brooklyn Decker?

Brooklyn Decker is a talented and famous American model and actress.  She is well recognized for her appearance in the ‘Sports Illustrated Swimsuit Issue in 2010.

She is also popular for being the wife of former tennis player Andy Roddick.

She was born on April 12, 1987, in Kettering, Ohio in the USA. She is currently 35 years old. Her father’s name is Stephen Decker (pacemaker salesman) and her mother’s name is Tessa (nurse). She has got a younger brother Jordan.

She was discovered in a shopping mall by a talent scout when she was a teenager. Brooklyn holds American citizenship and her ethnicity is Caucasian.

She completed her early education at David W. Butler High School. She also attended Midlothian High School and the University of Virginia.

Brooklyn Decker debuted her modeling career as the face of prom dress maker Mauri Simone. Later, she modeled for several magazines including ‘Teen Vogue’, ‘Glamour’, ‘FHM’, ‘Cosmopolitan’, and many more.

She also made her appearance in the music videos for the band 3 Doors Down and Jimmy Buffett.

She gave the audition for the ‘Sports Illustrated Swimsuit Edition in 2005 and a year later, she posed for her first-ever photo shoot for the Swimsuit Edition. Brooklyn was again featured in the 2007 and 2008 editions and became the cover model for the year 2010’s swimsuit edition of the magazine.

Brooklyn debuted her television career with the episode of ‘Chuck’ in 2009 and appeared in an episode of ‘Royal Pains’ and ‘Ugly Betty’ in the same year.

She debuted her film career with the movie ‘Just Go With It in 2011 in which she portrayed the role of Palmer Dodge. She appeared in movies like ‘Battleship’ and ‘What to Expect When You’re Expecting in the same year.

Then, she made a guest appearance in the series ‘New Girl in 2013 and was cast as Jules Talley in the comedy series ‘Friends with Better Life in 2014.

She has been portraying the character Mallory Hanson in the television series ‘Grace and Frankie since 2015.

As of 2022, she has an estimated net worth of around $10 million, and her main source of earnings is her professional career.

She initially rejected the request for a date by the tennis star Andy Roddick but later she realized that she found her perfect match.

Brooklyn Decker has a height of 5 ft. 9 inches and she weighs 53 kg. Also, Brooklyn has got blue eyes and blonde hair. Her body measurement is 36-24-34 inches.

To know more about Meredith Eaton, Connor Trinneer, and Nat Zang, please click on the link.