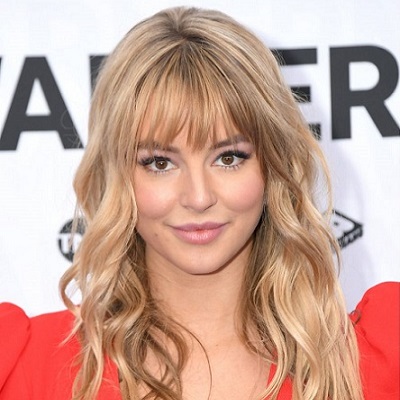 ''It’s been such a privilege to have the opportunity to do comedy. I think that if you can do comedy, you can do any other type of genre.''

''I’m a total goon in real life – I’ve always loved making people laugh and I guess the timing and rhythm of comedy have always come naturally to me.''

''With so much to be cynical about these days, who doesn’t need more laughter in their lives?! I hope Tacoma FD can bring people just even a smidgen of the joy it has brought me.''

''I’m super emotionally connected to music. I make playlists to curate every facet of my life, especially in my work. I am always making playlists for my characters, which is a big part of my preparation as an actor. Nothing can help me tap into different parts of myself faster than music.''

Hassie Harrison has been dating Austin Nichols since 2018. Austin is an American actor and director best known for his performances in tv series like One Tree Hill, The Day After Tomorrow, and The Walking Dead. They came out publically with their relationship after walking on the red carpet at the 2018 seachange Summer Party.

Before Austin, Hassie was in a relationship with actor Wilson Bethel while her boyfriend Austin had an affair with actress Chloe Bennet.

Who is Hassie Harrison?

Hassie Harrison is an American actress, dancer and social media personality who came into fame after playing the role of Jem in American anthology horror film Southbound. She is also known for being the girlfriend of American actor and director Austin Nichols.

The actress was born on March 20, 1990. As of 2019, she is 29 years old. She was born and raised in Dallas, Texas. She was born to American parents. She herself belongs to American nationality. Her mother’s name is Laurie Harrison.

She also attended a drama school in Los Angeles, California headed by Ivana Chubbuck. There she learned the modern method of film performance and creativity. She has also participated in Upright Citizens Brigade and has also studied under Lesly Kahn.

She first started her acting career by starring in a Tv series named Hart Dixie in 2014. She was part of the show until 2015. She appeared in 2015 film Dementia as Shelby Lockhart. Then she guest appeared in the horror movie Southbound the same year(2015).

The movie brought many positive responses to her acting skills from the audiences. In 2018, the actress appeared in another American science fiction adventure film A-X-L along with Becky G, Thomas Jane, Alex MacNicoll, Dominic Rains, Sam Upton, and many more. She had a small role gas station girl named Kristen. She has played a part in 2019 film Tacoma FD where she has portrayed the character, Lucy McConky.

There is no doubt that she earns good amount from her acting career as well as social media platforms. Her net worth is estimated to be around $250,000 annually. She has around 52K followers on her Instagram account.

The actress has a beautiful curvy body. She weighs around 48 kilos. She also has a good height of 5 feet and 6 inches. Her estimated body measurements are 36-24-35. She has blonde hair color with beautiful brown colored eyes.

Hassie Harrison celebrates her birthday at the premiere of Tacoma FD

The 29 years old actress got a big surprise birthday cake at the premiere of her Tv show Tacoma FD on Wednesday in Los Angeles. The actress was joined by her co-stars Kevin Heffernan, Steve Lemme, Eugene Cordero, Marcus Henderson, and Gabriel Hogan. She later thanked the surprise through her Instagram post.

The social media star loves spending time with her near and dear during her leisure period. Similarly, traveling is also one of her favorite things to do.

She often posts photos of her traveling to different places through her Instagram account. She loves clean beauty and wellness and therefore takes good care of her eating and exercise habits.

Her love for helping people has made her a certified health coach a couple of years ago. In an interview, she revealed that she was super emotionally connected to music and makes playlists for her characters. She loves dogs and had a dog named Cocomeaux which died in July 2019.