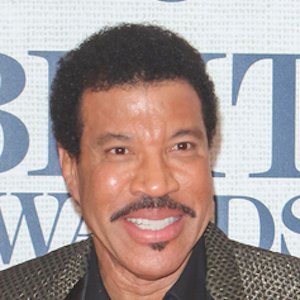 I think the whole world is dying to hear someone say, 'I love you.' I think that if I can leave the legacy of love and passion in the world, then I think I've done my job in a world that's getting colder and colder by the day

Greatness comes from fear. Fear can either shut us down and we go home, or we fight through it

Taking time to sit back and watch and think about what you've seen is important. Traveling did a great deal to me. I found that when I travel and just sit in the corner and watch, a million ideas come to me.

Lionel Richie has been married and divorced twice in his life. His first wife was Brenda Harvey-Richie. They got married on 28 October 1975. The couple had a daughter named Nicole Richie.

They divorced on 9 August 1993. He got married for the second time on 21 December 1995, with Diana Alexander Richie.

The couple had two children named Sofia Richie and Miles Brockman Richie. They divorced in 2004. In 2009, he dated actress Bai Ling for a few months.

Who is Lionel Richie?

Lionel Richie is an American singer, songwriter, actor, and record producer.  He is a former member of the funk and soul band, Commodores.

He co-wrote the 1985 charity single “We Are the World” with Michael Jackson which sold over 20 million copies.

Richie has sold over 100 million records worldwide, making him one of the world’s best-selling artists of all time.

He grew up on the campus of the Tuskegee Institute. Richie graduated from Joliet Township High School, East Campus. He played tennis while he was at college.

His nationality is American and he is of African-American, English, Scottish, and French-Canadian ethnicity.

Lionel Richie began his career as a member of R&B groups in the mid-1960s.  In 1968, he became a singer and saxophonist with the band Commodores.

They signed a recording contract with Atlantic Records in 1968. By the late 1970s, Richie he began to accept songwriting commissions from other artists.

He released his debut solo album, Lionel Richie in 1982. The album hit #3 on the music charts and sold over 4 million copies. His second album Can’t Slow Down won two Grammy Awards, including Album of the Year. Richie has sold over 100 million records worldwide.

He is one of the world’s best-selling artists of all time. He is also a five-time Grammy Award winner. In 2016, Richie received the Songwriters Hall of Fame’s highest honor, the Johnny Mercer Award.

He is currently judging one of the greatest shows the American Idol with Katy Perry and Luke Bryan.

Richie has helped to raise over $3.1 million for the Breast Cancer Research Foundation.

He has a net worth of 200 million dollars. His salary and other earnings are not disclosed.

Lionel Richie has a height of 5 feet 11 inches tall and weighs 77 kg. He has black hair color and dark brown eye color.

His shoe size 11 (US) and his dress size are unknown.

Splitsville! Sofia Richie’s father Lionel Richie does not approve of the relationship of his daughter with Scott Disick!