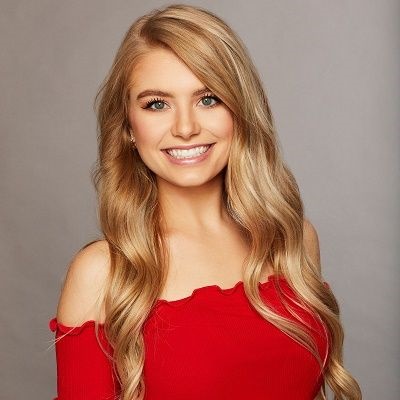 “I’m not okay today and I’m going to take a break from social. Thank you to everyone who is reaching out xx'

“Every relationship is different and it’s like. I mean in the most respectful way — it’s nobody’s business how our relationship works. We both have so much going on right now. She’s in Florida, I’m in New York but we do spend time together. Just because we don’t broadcast it doesn’t mean that we’re not together'.''

“If you just jump into it and just rush everything, for me personally, that’s not how I could have a successful relationship. I have to definitely take it at a steady pace, We’re definitely just dating right now. There’s so much going on for both of us that it’s like, ‘Oh, planning a wedding right now just sounds so intense.’ So we’re definitely taking it slow and just enjoying our time together.”

But previously, she was engaged to Kristian Haggerty and had plans to spend their lives together. They were the first same-sex couple on the reality show of Bachelor.

On October 31, 2019, they announced their break up via Instagram post for which they both received positive and negative support.

She currently lives in Los Angeles, California, US.

Who is Demi Burnett?

Demi Burnett is an American reality star and a social media star. She is also an interior designer, model, and actress.

Demi came into the limelight after appearing in the twenty-third season of the reality dating show, The Bachelor (2019).

Demi Burnett was born Demi Gabriele Elizabeth Burnett on February 21, 1995, in Texas, US. She grew up in the rural town of Red Oak, Texas.

Her mother’s name is Tina Jean Jordan. Burnett revealed that her father is very supportive of her career choice and two have a really close relationship with each other.

She also has a sibling brother, Drake Burnett.

Her mum, Tina was sent to jail against bank fraud while Demi was on the sets of The Bachelor and was released before Demi was sent out of the show.

In 2007, her mother was again arrested for committing theft, forgery and violating her probation. During that time, she lived with her father and stepmother.

Before participating in The Bachelor’s Twenty-third season, Demi worked as an interior designer.

On the show The Bachelor, she was one of the 30 contestants who were trying to win the heart of Colton Underwood, a former football player as well as a charity founder from Washington, Illinois. The season of the show was premiered on January 7 of 2019.

She appeared in the show Bachelor in Paradise (2019) and The Bachelorette (2019). Demi also worked as the host for the show Entertainment Tonight in 2019.

The twenty-three years old reality star has an estimated net worth of $1 million.

On October 31, 2019, Demi Burnett and her former girlfriend Kristian Haggerty announced their break up via Instagram. Burnett, in particular, got tons of heat, causing her to take a temporary break from social media.

She tweeted, “I’m not okay today and I’m going to take a break from social. Thank you to everyone who is reaching out xx,”.

You may also know about net worth, body measurements and early life of Krystal Nielson, Kevin Wendt, Kaitlynn Carter.